By JOHN KELMAN
November 6, 2004
Sign in to view read count 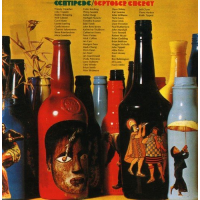 One look at the fifty-piece Centipede orchestra, organized and led by British free jazz pianist Keith Tippett over thirty years ago, and the mind boggles that such an unwieldy collection of musicians, from such a multitude of musical camps, could ever be brought together to create a remotely coherent musical statement. And, truth be told, when Septober Energy was released in '71, it was met with almost universal critical derision.

Maybe it's because Tippett, who had already burst onto the scene with a refreshing ability to meld free improvisation with heady arrangements on his first two records—You Are Here' I Am There ('69) and Dedicated to You But You Weren't Listening ('71)—had bitten off more than he could chew with an ambitious 85-minute, four movement suite. Maybe it was that this stylistic melange tried to buck the old adage "you can please some of the people some of the time, but you can't please all of the people all of the time." Or maybe it was just plain critical cantankerousness. Irrespective, looking back at Septober Energy , remastered and reissued by BGO Records in '00, reveals a piece of work that may be flawed, but still has much to recommend.

Part 1 is the most problematic, mainly because it doesn't really know what it wants to be—pedal tone passages are replaced by a sudden anarchy of instruments building into a marching drum passage with ascending and descending horns and a pattern of strings creating the first recognizable motif of the disc before breaking down into a quartet that sounds like an outtake from King Crimson's Islands —which is no surprise considering Crimson guitarist Robert Fripp not only produced Septober Energy , but used Tippett extensively on his own records at the time.

Part 2 hangs together better, with a more assertive rhythmic focus that makes good use of flugelhorn player Ian Carr and oboist Karl Jenkins over a more accessible funk groove. The only misstep is Brian Godding's stiff and cliché-ridden solo, more the pity since a far better guitarist, Fripp, was only a few feet away in the control booth. But one can easily ignore Godding's less-than-memorable contribution, as solos by cornet player Mark Charig and saxophonist Brian Smith more than make up for his obvious deficiencies.

Part 3 suffers the same flaws as Part 1, but Part 4 contains some positively beautiful moments, notably Tippett's piano solo which opens the movement and includes some McCoy Tyner-ish inflections. And after some of the chaos that came before, the final movement is more groove-centric and approachable, like Part 2.

Bombastic? Sometimes. Over-reaching? Possibly. But reassessing Septober Energy has value, if for no other reason than it harkens back to a time where an album of this kind was even possible , and on a major label to boot. Flawed gems are still gems and Septober Energy is one with its own peculiar beauty.