By Troy Collins
October 6, 2008
Sign in to view read count 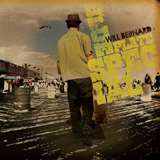 Blue Plate Special is San Francisco Bay Area guitarist Will Bernard's fifth release as a leader and his second for Palmetto Records, following the star-studded groove-fest, Party Hats (2007). Dispensing with the additional horns and guest instrumentalists of previous releases, this session features Bernard as the leader of a stripped-down quartet. The relatively spare setting allows greater focus on his highly rhythmic approach to the guitar, with an emphasis on the empathetic interplay with his principle sideman, keyboardist John Medeski.

Accompanied by a stellar band, Bernard's quartet features three of today's most impressive jazz-funk virtuosos. Gov't Mule bassist Andy Hess and renowned Galactic drummer Stanton Moore are a tight and formidable rhythm section, able to navigate an endless variety of pneumatic beats and quick turnarounds with ease. A perfect foil for the leader, Medeski extracts a pungent vein of textures from his usual assortment of analog keyboards, conjuring distorted sheets of sound on the menacing "571" and scintillating tones on the surf-influenced "Gen Pop."

As comfortable churning out searing funk as he is waxing poetic on cinematic ballads, Bernard is an equally tasteful tunesmith. His infectious rhythms, catchy melodies and tight harmonies offer resilient structures for the quartet to expound upon. They stretch out, varying the dynamics while drifting briefly into outside territory without ever leaving formal constraints behind.

A refreshing example of intelligent party music, Blue Plate Special is another document that reinforces Bernard's reputation as a talent deserving wider recognition. Fans of old school funksters like Medeski, Martin & Wood, Galactic and Zony Mash would be well advised to check this out.