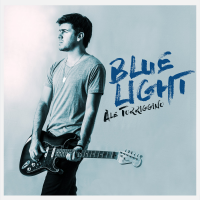 After listening to Alejandro Torriggino's latest album, Blue Light, it is obvious that this talented singer-songwriter from Argentina has grown considerably since his superb debut Sureste, an album which took the listener back to the days of classic Neil Young and the sunny, reflective climes of Laurel Canyon. Here, Torriggino, once again, has composed a collection of tunes that are as engaging as they are memorable.

The album gets off to a good start with "The Healer," a country-rock number concerned with the healing power of music, a theme which many individuals around the world can relate to. On "When The Tide Begins To Turn" he grunges things up a bit, like Neil Young circa On The Beach, before unleashing his inner David Gilmour on the excellent "Grey Blue Skies," where Ale displays his ever growing skills as a guitarist.

The rockabilly rave-up of "Catherine" is a pure hoot (Brian Setzer look out!), before we return to Pink Floyd via Wyoming territory in "If I Go," an atmospheric piece the likes of which Marc Ford (ex Black Crowes) would be proud to have written. The political "Waiting for the War to Come" is a paean to the absurdity and senselessness of conflict, expressed via a barrage of electric guitar and distortion, a la Neil Young and Crazy Horse. The only negative aspect of the recording is that it doesn't go on longer.

"Hostage" contains one of those great guitar riffs which the listener will probably find hard to forget, while "Needin' Your Love" is the sort of smoky, late night bluesy ballad this particular critic never tires of listening to. It's just a shame the song fades out way too soon.

"The Color Life" is a seductive, Dylanesque composition replete with a subtle, delicate string arrangement, and sentimental lyrics, the kind which make one sit back and reflect on the here and now.

Blue Light is an intelligent, thoughtful record, by an artist clearly dedicated to his craft. What this LP proves is that Alejandro isn't going away anytime soon, and whose talent will be with us for a long time to come.

The Healer: When the Tide Begins to Turn: Grey Sky Blues: Catherine: If I Go: Waiting for the War to Come: Hostage: Needin' Your Love: Shelter: The Color Life