By John Kelman
September 3, 2004
Sign in to view read count 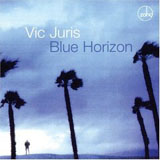 Sometimes you put on a disc and from the first note you know it's the real thing; honest, direct and completely unassuming, it resonates instantly. Such is the case with guitarist Vic Juris' new release, Blue Horizon. While there are certain precedents for what he does, he has a sound and approach all his own—and while he may not be the household name that some of his immediate contemporaries are, it is completely mystifying as to why this is so.

With a lineup that prominently features vibraphonist Joe Locke as well as bassist Jay Anderson, drummer Adam Nussbaum, and percussionist Jamey Haddad, Juris has created an album that manages to challenge without losing any of its accessibility. Like Pat Metheny, Juris shares the uncanny ability to take advanced harmonic concepts and mask them in deceptively simple sounding contexts. And the inclusion of Locke draws the line even further back to Metheny's first employer, Gary Burton, and his guitar-centric groups of the '60s and '70s. Still, while there is a certain lineage to Juris' music, he manages to imbue it with something indescribably him and completely modern.

Juris may have a warm electric tone that harkens to Metheny, but harmonically he is more directly related to John Abercrombie, with melodies that manage to be both singable and unpredictable. His formidable technique is evidenced only by the richness of his ideas; he is as economical as he is inventive. From the Brazilian- informed "Dancing Shadows" to the acoustic ballad "Soft Spoken," from the angular melody of "Kling On" to the more straightforward swing of "889," Juris is exciting, imaginative and, above all, lyrical. The best players manage to eschew predisposition, making each solo a unique experience, and Juris is clearly in that league.

Locke is, quite simply, the purist vibraphonist out there and, along with Stefon Harris and Steve Nelson, one of a small group of players who are truly developing the instrument's potential. His solos have that same sense of logical perfection so prevalent in Gary Burton's best work. John Abercrombie recently described Adam Nussbaum as "one of the most comfortable drummers in the world to play with—you can play anything with him and it all works because he's so adaptable and he swings so hard." On this record he continues to demonstrate why he remains in such high demand. Bassist Jay Anderson provides the perfect anchor and Jamey Haddad manages to colour the rhythm without getting in the way of the essential groove.

What is puzzling is how Juris, along with Locke and Nussbaum, can be musicians' musicians, high on the list for session and touring calls, yet eluding more widespread acclaim. On the strength of Blue Horizon , clearly in the running for this year's top ten list, it is the larger jazz public who is missing out. Anyone who hears this recording will know that this is what it's all about.