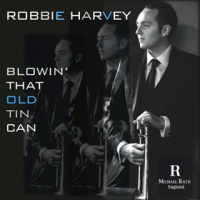 Robbie Harvey is one of the new young breed of straight-ahead, mainstream, jazz players whose emergence over the last decade or so gives lovers of the genre a warm feeling and an optimism for the future. What's more, his instrument of choice is the trombone. Blowin' That Old Tin Can is his debut album as leader—the title may be somewhat dismissive of his chosen horn, but the music is a celebration of its sound and of its place in a powerful, swinging, quintet.

Harvey was born on Jersey, an island which is part of the UK but sits just a few miles from the French coast. He moved to London in 2006, aged 18. Musically, however, it's classic American jazz that's captured his heart. Blowin' That Old Tin Can features standards such as Duke Ellington's "Tonight I Shall Sleep" and Raymond Hubbell's "Poor Butterfly" alongside more recent compositions including two of Harvey's own tunes.

Harvey and his fellow players deal with the varied tempos, rhythms and harmonies in their stride. "Tonight I Shall Sleep" features beautifully relaxed and delicate solos from Harvey and Greening. "Baubles, Bangles And Beads" is taken at medium tempo, Brown's skipping, joyful, drumming driving the tune—Harvey and Garnett's unison playing of the melody is superb—as are Greening's brief, sparkling, piano phrases—and each player delivers brief but creative solos. "Poor Butterfly" is played as a fast shuffle, Brown's again at the heart of the rhythm and Greening contributes a percussive, jaunty, solo. Garnett composed the boppy "Delusions Of Grandma" (great title) and takes his solo with relish.

Harvey's own compositions are immediately engaging—"Blowin' That Old Tin Can" is another bop number, upbeat and positive. "You'll Ask Why" is an old-school romance, played gracefully by the quintet. Both tunes fit neatly alongside the standards. Blowin' That Old Tin Can certainly looks to past masters for its inspiration, but this hugely enjoyable debut also augurs well for the future of their music—and for Harvey's future too.

Blowin' That Old Tin Can; You'll Ask Why; Poor Butterfly; Carn Galva; Delusions Of Grandma; I Should Care; Tonight I Shall Sleep; Baubles, Bangles And Beads.