BY ROGER FARBEY
September 11, 2018
Sign in to view read count 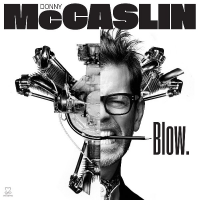 At first listen, Blow sounds more like a rock album than a jazz one. The catchy "What About The Body" could arguably be mistaken for one of King Crimson's more vituperative numbers featuring Adrian Belew. Ryan Dahle's emotionally-charged vocals are equally at the forefront of the explosive "Club Kidd." But the selection also includes three instrumental tracks too, such as the grungy, anthemic "Break The Bond," the polyrhythmic "Beast," and "Exactlyfourminutesofimprovisedmusic" (which speaks for itself) all underpinned by Tim Lefebvre's pulsating bass lines.

This is way different from McCaslin's previous albums Beyond Now ( Motéma Music, 2016), which exuded a ruminative quality, or its impressive predecessor Fast Future (Greenleaf, 2015). Then of course there was the 2016 paradigm shift that was David Bowie's Blackstar, which almost overnight transformed McCaslin from an imaginative and well-respected New York jazz saxophonist and composer into an internationally renowned musician, partly due to its principal's death two days after its release but also because his contribution helped make Bowie's swan song one of his best and certainly most poignant albums.

The darkly melodramatic "Tiny Kingdom" offers semblances of Jim Morrison or even Bowie, whilst the airy pop-ish vocal harmonies on "Great Destroyer" channel R.E.M. or even, at a pinch, the Beach Boys. On "The Opener," featuring Mark Kozelek's (from Sun Kil Moon) spoken vocals, the hypnotic music and narrative are complemented by Kozelek's engaging voice. The closer, "Eye Of The Beholder" features sultry vocals by fellow Bowie collaborator Gail Ann Dorsey and is unequivocally beautiful; arguably, the album's masterstroke.