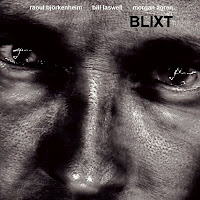 Few musicians are more aware that music has no borders, and—more than anything else—that the word "genre" is anathema, than Bill Laswell. The bassist has been uncompromising in this regard throughout his career and was not about to be undone for this musical adventure. Consequently, on the brilliantly crafted BLIXT, Laswell has partnered with an old cohort, guitarist Raoul Björkenheim, and a slightly newer one, drummer Raoul Bjorkenheim—Bill Laswell—Morgen Agren. Together, they are involved in the creation of some of the finest music of the year—music that has no easy home anywhere and yet is comfortably at home everywhere. For here are three musical terrorists inhabiting more so-called genres" at once, and blurring their edges to mix more metaphors, more than anyone except possibly Charles Mingus circa 1957.

Music that singes the ears as it strikes like bolts of lightning deep into the soul—palpitating, fibrillating with Laswell's rumbling bass, the shredded harmonies of Björkenheim's guitar scorching with the rolling thunder of Ågren's drums. The guitarist is stoic as Laswell's bass curves through the air like Thor's hammer, battering down musical barriers that have prevented the musical horizons from being pushed back. The musicians have created vaunted charts such as "Black Whole" and "Moon Tune," which appear to thunder across trembling skies above the group's oceans of sound. These melodies and their shuddering harmonies are so overwhelming and so beautifully oblique that they shatter all rational thought and concepts of logic. Yet the musicians are able to make every note well-meaning and to link up with the next, albeit surreptitiously, so that in the ultimate analysis, it is as if each of the three has risked his life for each note.

Although he is anything but predictable, Laswell continues to blow out the denizens from the depths of the soul; he proceeds to occupy it with gravitational notes that hang like swords above their proverbial heads. His tubular bass notes thunder and shock the eardrums with deafening black streaks of lightning. The guitar lays siege to the same senses that die and recover from the onslaught, only to be shattered again with fuzzy licks and wild sensational harmonic shreds that terrify the senses almost throughout. Suddenly there comes a moment of hypnotic calm—like being put to bed by the droning strains of an Indian raga. The stammering drums and aching guitar rolls are separated by the intense rocking of Laswell's bass. This is the essence of "Ghost Strokes," the calm before the musical storm breaks again.

But then again, who can tell? With Laswell nothing is certain, and everything that matters is beautifully understated. Calm after the musical blitzkrieg—the Blixt—continues to taunt the senses until the very end of this utterly fabulous album.