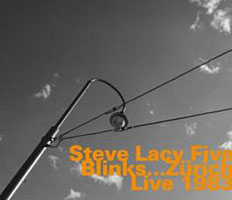 Blinks...Zurich Live 1983 is one of those ageless albums that accentuates the unparalleled synchronicity of iconic soprano saxophonist Steve Lacy's Five, captured live at a 1983 concert in Zurich, Switzerland. Packed with the leader's linear and concise theme constructions, the band reconfigures and rewinds many of the primary melodies amid moments of energized minimalism and lyrical eloquence. Over the course of time, it is perhaps more apparent these days that Lacy and saxophonist Steve Potts were near perfect foils—indeed, a match made in heaven. However the democratic mindset of the band parlays an immensely potent force.

The final, 23-minute "Clichés" is a testament to the musicians' ability to effortlessly unite contrasting genre inferences into a comprehensive vernacular, abetted by its group-focused character and cunning stylizations. Commencing with Oliver Johnson's mallet instrument intro, summoning a worldly vibe, the quintet launches into a jaunty flow, tinted with shuffle-swing grooves, fractured loops, and multi-threaded dialogues.

Expansive, yet gushing with the pursuance of side quests, the band's momentum simmers during the bridge as the soloists elevate the pitch, enamored by Irene Aebi's contrasting vocal harmonies over the top. Hence, it's a desert island disc that reemphasizes Lacy's enduring inscription as an innovative modern era idealist who possessed a voice unlike any other.