By Bruce Lindsay
September 27, 2016
Sign in to view read count 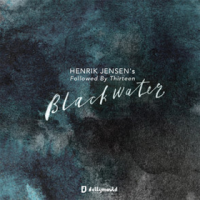 Blackwater is the second album from London-based Henrik Jensen's Followed By Thirteen. There's one change in personnel from debut album Qualia (Jellymould Jazz, 2013)—Antonio Fusco replacing original drummer Peter Ibbetson—but the instrumentation remains the same. Three years on, the band's increasing experience and maturity as a unit is reflected in the compositions and musicianship displayed here.

The band may be based in the UK, but its members are an international bunch. Bassist and leader Jensen is Danish, as is pianist Esben Tjalve; Andre Canniere hails from Philadelphia and drummer Fusco is Italian. Although the band's name is somewhat enigmatic—followed by thirteen what?; should we be concerned about such stalking?—the music is warm and accessible.

After Canniere's bright opening phrase, "The Dutch Danemann" bursts into life courtesy of the driving rhythm provided by Jensen, Tjalve and Fusco. The opening section of "London -Berlin" moves between hectic activity and calmer, more settled, moments—perhaps a reflection of Jensen's experience of the two cities. The hectic elements gradually take precedence as all four players up the pace and drive, Fusco urging Tjalve's piano solo forwards.

"Lullaby for the Little One" is a slow, gentle, solo bass outing. It serves as something of an introduction to "Schur-as," which continues in much the same vein as the rest of the band join in one by one to build the tune layer upon layer. The two tunes contrast with the faster, more groove-focussed, numbers and show how the four players can control their energies to craft, just as effectively, subtler and more relaxed music.