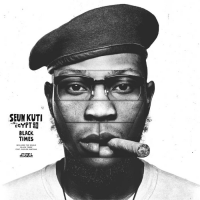 Seun Kuti's fourth album fronting Egypt 80, the all-conquering Afrobeat band he inherited from his father, Fela Kuti, marks the end of an era—and also supports the maxim that the more things change, the more they stay the same.

Black Times is the first album released by Egypt 80 not to feature saxophonist and keyboard player Lekan Animashaun, who was the ensemble's bandleader since its formation in 1979 until last year. Animashaun joined Fela's first group, Koola Lobitos, in 1965, and was a key member of all his subsequent bands until Fela's death in 1997. He resumed leading Egypt 80 when Seun revived it, switching from baritone to alto saxophone in 2009 and, a few years later, to keyboards. A gentle and wise man, and a superb musician, Animashaun will be missed. But at age 81, and after 53 years at the wheel, he has earned the right to kick back a little.

Black Times, however, represents continuity as much as it does a break with the past. Fela's youngest son is a real chip off the old block, a passionate and eloquent songwriter and campaigner, whose lyrics touch on the same issues as did those of his father—the battle for racial and economic equality in Africa and across the world, the struggle for peace not war, the corruption of politicians and corporations, the spiritual poison that is consumerism, and the right of anyone to fire up a fat one when he or she chooses to. Seun is also shaping up to be as courageous a campaigner as his father. A couple of years ago, he made a high-profile appeal for the social and legal acceptance of gay people in Nigeria and elsewhere across Africa, for which he received the predictable barrage of online abuse and death threats. Fela would be proud of him for taking that stand, as well as for the way he is keeping Afrobeat on track as rebel music.

Which is not to say that Seun is keeping every detail the same. He is tweaking the edges. On Black Times, Robert Glasper adds some tasty keyboard touches to "Last Revolutionary" and Carlos Santana some gritty jazz-rock guitar to the title track. And among the younger musicians in Egypt 80, trumpeter Oladmeji Akinyele is rekindling the hard-bop flame much as Christian Scott is doing in the US, while simultaneously giving a respectful nod to Africa 70's original lead trumpeter, Tunde Williams. Black Times is a life-affirming delight from start to finish.