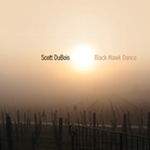 There is a deep, questioning spirituality that pervades the music of Scott DuBois. On Black Hawk Dance, his second Sunnyside release, the music becomes a kind of ancient/modern ritual that reaches outward and upward to seemingly attain—as Don Cherry once did—complete communion with the Divine. But the journey is not easy, as the music on this album will verify. It comes at a price. The artist is heard grappling with a soul in torment before he finds solace in the sound and silences of that which surrounds him. Respectful of the gift of musical nirvana that he has received in answer to his soul-stirring quest, the artist answers with seven offerings of his own, to commemorate his journey to bodily and spiritual oneness.

DuBois searches for a much deeper aspect of his art. He does not merely stop when he achieves the kind of tonal values and textures he is looking for; his quest is to find and create a canvas of total sound. This depth of involvement in his music includes weaving into the sonic tapestry both the sound and echoes of notes that chase one another as they form phrases and lines that criss-cross the soundscape. But they also include the space between the sounds—the silences that gain special meaning when the echoes of the notes played last that are left to pirouette and melt into their silences. The sonic shape-shifting that occurs when DuBois adds a myriad of overtones here is remarkable. Sometimes these swivel around the bass clarinet of Gebhard Ullmann as he reaches down gently into the depths of his instrument to play a mighty contrapuntal role in the song—in the interminable swing of "Black Hawk Dance."

On "Souls," on the other hand, the relationship between the stuttering calmness of guitar and Ullmann's restless tenor saxophone lines is much more contentious and relentless. Finally the saxophone drops out of sight altogether leaving DuBois' guitar to continue depicting the spirit world playing off Thomas Morgan's ponderous bass line, plucked amid splashes of Kresten Osgood's cymbals. In between these two tracks there are mighty swoops and swells in the conversations between a gregarious Ullmann and a reticent Dubois, as they journey through "Illinois Procession Rain" and "Dust Celebration," with its incessant shuffle. "Isolate" is another brooding composition that meanders in and out of beautifully improvised sections, while "River Life" is a pulsating journey full of rapid and thoughtful changes.

Scott Dubois is a thinking, almost brooding musician. His music is of a singular nature with well-crafted sound seeks to mirror the depth of an artist in the manner that John Coltrane and Alice Coltrane did in the sunset of their careers, when they discovered that the artist's life was greater than the sum of the music they had recorded. Still, their audiences cheered at having a record of their remarkable journeys, as is also the case with Black Hawk Dance.