BY DOUG COLLETTE
February 8, 2014
Sign in to view read count 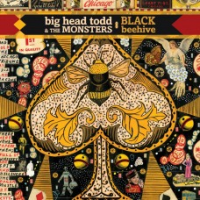 Big Head Todd & The Monsters have maintained a solid and occasionally high profile since their formation in 1986. Regular studio and road work has produced a fairly extensive discography of albums and DVD's as well as authorized concert recordings, including their previous project under the pseudonym Big Head Blues Club, 100 Years of Robert Johnson, the flavor and style of which tribute to the seminal bluesman Robert Johnson carries over to Black Beehive.

Produced by Steve Jordan, a musician of no little cache himself, having worked with Neil Young, Eric Clapton, Keith Richards and John Mayer among others (in addition to compiling a noteworthy resume of session credits), this is one of BHTM's more inspired works, quite likely due to the aforementioned touch-point with their roots. All original material from guitarist/vocalist Todd Park Mohr features instrumental accents beyond the core quartet including steel guitar and harmonica that decorates the understated shuffle of "Travellin' Light" and, as with the crisp piano dominating the title song, reflects nuances of the songs as well as the solid if unexciting musicianship that radiates the group's gusto for their music.

The opener "Hey Delila" sets the tone for the album with sly bluesy touches emphasized by contrast with acoustic guitars. Similar folk influences form the primary source of style for "Everything About You," and the quiet closing of "Forever Bonnie," suggesting an unplugged approach would suit Big Head Todd and The Monsters without sacrificing the style they've nurtured, except perhaps the guitar heroics of the leader that take over the middle of this cut.

The dirty riffing of "Seven State Lines' exemplifies Jordan's production touch because it's such a change of pace from its predecessor and the pop structured "Josephine" that follows; Mohr's got an inviting voice in and of itself and, like his main role model Eric Clapton, he's become a more interesting singer over time, so much so, that his vocals are almost as much of an attraction as his guitar playing and a bonafide virtue as Black Beehive unfolds.

The unity of the band serves well the compact clean tracks, though a single cut with extended improvisation would elevate the impact of the record. The relish BHTM bring to what they do is out of proportion to its emotional depth otherwise, especially noticeable on overt personal statements the like of "We Won't Go Back" or the topical "Fear Greed and Ignorance," where percussion lightens the self-consciously portentous mood.

More stylists than innovators, Big Head Todd & The Monsters nevertheless continue to prove loyal to their muse, almost relentlessly so. As a result, while it's hard to truly love Black Beehive, it's virtually impossible not to like it largely because of the band's commitment to their craft.

About Big Head Todd and the Monsters