By Doug Collette
February 24, 2011
Sign in to view read count 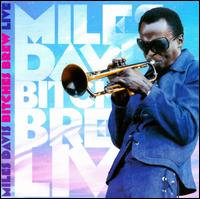 Bitches Brew Live documents Miles Davis, as he moved off the cusp of acoustic and electric jazz. The hour-long disc contains two live performances that constitute concert corollaries to the studio albums of their time, with which The Man With The Horn revolutionized modern jazz.

The three recordings from the Newport Jazz Festival in 1969 have the streamlined clarity of In A Silent Way (Columbia, 1969), in part because saxophonist/composer Wayne Shorter missed the gig. There is none of the hypnotic languor of the aforementioned album, however, but rather a noticeably insistent pace to the quartet's playing set by the leader: Davis may have well been demonstrating some impatience as he was about to begin recording Bitches Brew (Columbia, 1969) the very next month.

From that album comes a ten-minute version of "Miles Runs the Voodoo Down," followed by an unusually truncated 'Sanctuary" and "It's About That Time"/"The Theme," the former of which segue reappears on the August 1970 set list from the Isle of Wight Festival, albeit offered in a much more densely arranged version. Miles-o-philes who may have felt cheated because a Tanglewood concert with this same lineup was only available in Bitches Brew 40th Anniversary Collector's Edition (Legacy, 2010) are vindicated here.

There's an even sharper edge to this music and, in actuality, multiple edges: Chick Corea isn't content just to play his electric piano, but uses devices on various occasions to create tones even harsher than the braying of the trumpet at certain intervals.

Still, there's no lack of dynamic contrast in the musicianship. Jack DeJohnette is as disciplined in his roiling rhythms as he is slowing down the pace and opening up space in the instrumental textures to allow Airto Moreira's integration. And, for his part, Davis carefully orchestrates the set so the ensemble navigates peaks of intensity equally skillfully at both high volume and low, particularly during "Spanish Key."

Given the plethora of concert recordings already available in similarly electrified style as Bitches Brew Live, only time will tell if it becomes a truly essential piece in the Miles Davis discography, despite the Newport recording having never seen official release (the Isle of Wight performance was only available in a heavily edited version prior to its inclusion in The Complete Columbia Album Collection in 2009). But the graphic design for the CD and accompanying booklet, from the handsome period photos to Michael Azerrad's astute essay, only adds class to the package.