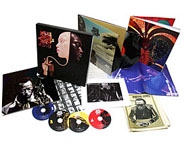 The 40th anniversary of the groundbreaking fusion album Bitches Brew offers an opportunity to expand upon the context of its original unveiling. The impact of this recognition can't even be mitigated by a collision of commerce and creativity that echoes some of the furor over the original 1970 release.

The larger of the two packages follows what has become a template for such releases, the selling points of which include vinyl LPs and a book (including an engrossing essay by Greg Tate), in addition to audio and video counterparts. The unreleased studio recordings (not included on the previously issued Complete Bitches Brew from 1998) are alternates take, one of which ("John McLaughlin") isn't appreciably different from the official take, while the other ("Spanish Key") moves a little too fast for its own good. Similarly, the two stereo and two mono 45 single edits, for all their brevity, do manage to capture as much of the album's haunting atmosphere as their truncated likes can hold.

The August 1970 concert live recording of Davis and his band at Tanglewood, in Lenox, Massachussetts, displays the bravado the trumpeter would always bring to his rock star co-billings, on this date, Santana at the height of the original lineup's powers. Remarkable as it sounds, given the creative editing of producer Teo Macero, the roiling mix of percussion and electric keyboards conjures up the eerie mood of the album, yet with sharper edges and more density, essentially reaffirming the careful thought Davis gave to the development of his new "directions in music" in a live setting

Such sounds had as much visceral as cerebral impact, which makes the musicians' demeanor onstage—as seen on the DVD of a complete Copenhagen concert recorded three months later—that much more surprising. Or, perhaps not: would these five men—including bassist Dave Holland, drummer Jack DeJohnette, saxophonist Wayne Shorter and electric keyboardist Chick Corea—be able to interact so accurately if engaging in wild physical gesticulations, reflecting the movement of their instrumental sounds, rather than the intent studious concentration they exhibit following their muse and each other?

The isolated close-ups, established early in the sixty-plus minutes, are rotated in Cycle, which only reinforces the rather insular manner, taken from Davis himself, so that the group's sole concession to theater is a slight nod to the fashion of the times, the logical extension of which resides in the Man with the Horn's harlequin-like color outfit. Though bereft of bonus features, this disc, like its audio counterpart, deserves to be seen as well as heard, which makes an otherwise savvy marketing ploy a potential source of frustration to collectors and fans alike: the streamlined three-disc Legacy Edition, includes the DVD, but not the audio-only live CD. Only if these concert companion pieces see another release, separately or together, will completists be as satisfied as music lovers with the 40th anniversary package of Bitches Brew.