In Praise of John Russell

BY JOHN EYLES
August 24, 2010
Sign in to view read count
English guitarist John Russell is from the wave of free improvisers who came after the so-called first generation typified by such "founding fathers" as guitarist Derek Bailey, saxophonist Evan Parker, trombonist Paul Rutherford and drummer John Stevens. In his teens, Russell played at the Little Theatre Club, the cradle of free improv in London, and took lessons from Bailey. His first recording, Teatime, was issued on Incus in 1975.

Since 1977, Russell has exclusively played acoustic guitar, developing a personal style that is instantly recognisable, displaying traces of Bailey while being distinctly different from Bailey's own playing. Russell always gives the impression that he has time to spare and never seems in a hurry; he will sound single notes, letting them ring and fade away naturally, giving the listener the opportunity to savor them as he himself does; when playing chords, he will often sound notes individually, sometimes emphasizing one by playing it louder or repeating it. He occasionally employs such techniques as scraping the strings or playing below the bridge, but never gratuitously; instead they are smoothly integrated into the flow. When playing with others, he is never forceful, typically adopting a generous role that combines accompanist and equal partner.

As well as being an improvising guitarist, since the mid-1970s Russell has organized concerts. He curates the long-running monthly Mopomoso concert series and the annual Fête Quaqua improv festival. Both welcome improvising musicians and other performers from across the globe. At them, Russell himself is a frequent player, in duos or with his larger grouping Quaqua. These two new releases are fine examples of Russell at his peak. 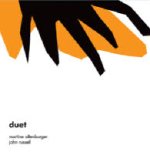 Duet is an unedited recording of a live duo performance by Russell and French cellist Martine Altenburger at the Musique en Mouvement festival in Jarrny, from November 2008. (It is divided into five tracks for convenience, but plays continuously.) Immediately after its release, Duet drew some reviews that were unnecessarily unflattering, in some cases even abusive; these said more about the reviewers themselves than about the actual content of the CD. As a result, it became something of a cause célèbre. But now that a decent interval has passed, it is possible to listen afresh to the music here without becoming embroiled in that controversy.

In typical fashion, Russell quickly slots into the duo with Altenburger, both sounding completely at home straight away. An easy balance is soon established, the ebb and flow between the two allowing space for the details of each player to be heard. The recording captures the sound of each instrument beautifully, down to the smallest nuance. Conservatory-trained Altenburger is a rather less-experienced improviser than Russell, being more used to playing scored pieces. Despite this, she gives an assured performance full of subtlety and restraint. She favors long bowed notes, giving her playing a mournful, keening quality that offsets and contrasts well with Russell's more percussive plucking. A textbook example of fine duo improvising. 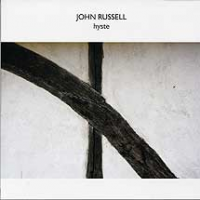 Hyste was recorded at the beginning of June 2009, at St. Peter's, Whitstable, in Kent (an English recording location that has become a firm favourite for Psi.) That recording session also produced Evan Parker's House Full of Floors (Tzadik, 2009) on which Russell plays. Hyste is a solo recording, a comparative rarity in Russell's sizeable discography, the only previous examples being one side of the LP Homecooking (Incus, 1979) and From Next to Last (Emanem, 2002). Comparisons between the three reveal how Russell's playing has evolved over the years despite always being recognisable as him.

Before coming to London in his teens, Russell grew up near Romney Marsh in Kent. The title of this album and its track titles all refer to Kentish dialect. So, "Alleycumfree" is a non-existent place—a nosy person asking where someone was going would be told, "To Alleycumfree." Here, it is also the title of the longest (over 31 minutes) piece, the album's tour-de-force centerpiece, a perfect example of Russell's style. While it is in progress, most listeners will be unaware of the range of techniques Russell employs, instead being carried along by the structured flow of the piece and its slowly unfolding narrative. Exquisite.

The three tracks were recorded in one afternoon and are presented in the order they were played, giving the album a natural, logical dynamic that is very pleasing. The opener, "Weeker Passel," is taken at a leisurely pace as Russell warms up gradually introducing his trademark sounds as he becomes familiar with the resonances of the church and explores them. As with Duet above, the recording here (by Adam Skeating, one reason Psi favours this location) is ideal, even the merest touch of a string being faithfully preserved—very important in St. Peter's as the sounds resound, decaying slowly. After "Alleycumfree," "The Folkestone Girls" reprises its strengths, bringing the album to a satisfying conclusion.