Home » Jazz Articles » The Odd Trio: Birth of The Minotaur

The Odd Trio: Birth of The Minotaur

By Hrayr Attarian
January 28, 2013
Sign in to view read count 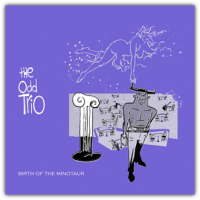 The dual themes running through The Odd Trio's genre-bending The Birth of the Minotaur are jam band-inspired spontaneity and intensely melodic and almost theatrical impressionism. Even though Greek mythology is the source of their inspiration the dozen pieces bear hints of cinematic scores, blues and rock in addition to Mediterranean folk music.

"Pasiphae's WIld Ride," for instance, can serve as a soundtrack to a Western, set in a world of alternate reality. Drummer Todd Mueller's thunderous beats provide both the framework and the momentum. Guitarist Brian Smith's blistering tones create an ambience inspired by composer Ennio Morricone and the Sergio Leone films he scored. Over this saxophonist Marc Gilley's warm tenor blows like the wind over a desert scene.

The title track has a psychedelic, vaguely Greek melody with strong rock and roll sensibilities. Gilley's soprano sax plays the lilting motif while Smith's guitar produces a hallucinatory soundscape with a strong ethnic flavor. The overall effect is as if singer/guitarist Jerry Garcia was playing an otherworldly bouzouki.

Classically trained, Smith is equally adroit at styles as diverse as heavy metal to baroque. He showcases his unique improvisational skills on such tunes as "Whisky." His tight and simmering solo is intricate, heady and mellifluous contrasting well with the looser, R&B-inflected Gilley.

An academician by trade, Gilley's performance is anything but scholarly. His saxophone is vibrant, his ethereal wails on "Persephone's Pomegranate" enhancing the kaleidoscopic grooves that his band mates lay down. He explores his passionate, earthy side on "Sleeping Ariadne" that also features Mueller's boisterous and angular percussion.

Equally adept at Latin, jazz and rock music, Mueller's colorful rhythms fuse elements of all three into a powerful driving force on "Ricio De Mare." His reserved exuberance, together with tight saxophone and pizzicato guitar, make for a hypnotic yet never repetitious vamp on "Information Fatigue," demonstrating that the album's strength lies in the ensemble playing.

"Sunday Morning Improvisation" is the supreme example of this camaraderie. Opening with Zen-like spirituality, the trio punctuates soothing silent periods with introspective and quietly exquisite lines. The song evolves into a dulcet ballad as the group plays swells of sublime notes.

The Odd Trio's second release is a delightful and stimulating musical collage with intelligently constructed improvisations that remain accessible. The immense talent of the individual musicians has imbued the disc with a clever originality that gives it a wide appeal.

About The Odd Trio