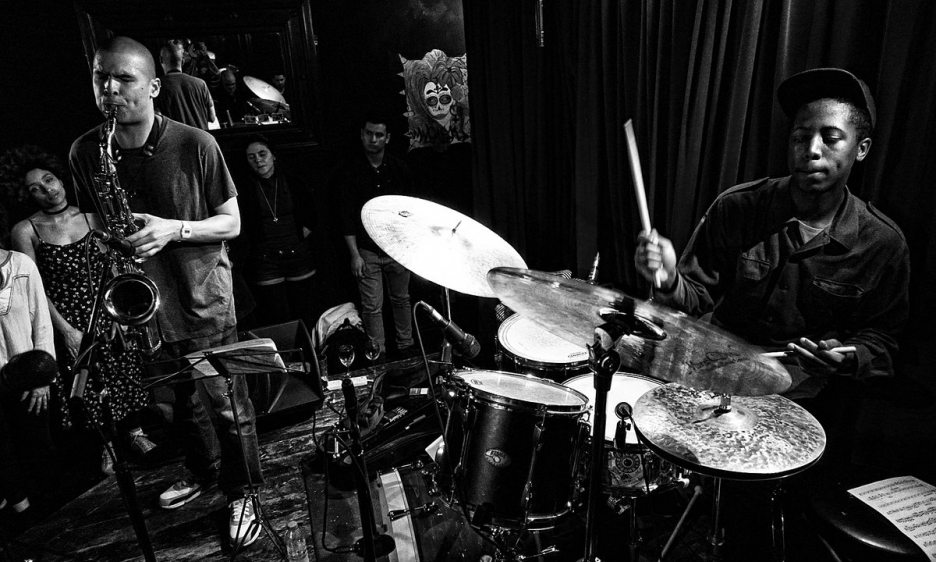 Binker & Moses began life around five years ago, when saxophonist Binker Golding and drummer Moses Boyd started playing ferocious, free-association duets during pre-performance sound checks as members of Zara McFarlane's band. Both musicians still tour and record with the singer, in fact Boyd co-produced McFarlane's 2017 blinder, Arise (Brownswood), but since 2015 they have also released three sublime albums under their own name.

The fearless, in the moment vibe of Dem Ones (2015), Journey To The Mountain Of Forever (2017) and Alive In The East? (2018), all recorded for London's vinyl-led label Gearbox Records, display Binker & Moses' sound-check origins clearly. The default position of the music, which is best described as semi-free, continues to be wild and almost wholly improvised, but now incorporates bespoke beats and skeletal tunes, the latter motif-like melodic fragments or stripped-down R&B riffs, as jumping-off points. It is the most thrilling sound on the contemporary London jazz scene, and it is attracting a growing audience of (mainly) young listeners, substantial numbers of whom (gratifyingly, given who created jazz in the first place) are black.

On their albums, Binker & Moses ring the changes by including guest musicians on some of the tracks. Journey To The Mountain Of Forever and Alive In The East? both feature saxophonist Evan Parker, trumpeter Byron Wallen, harpist Tori Handsley and drummer Yussef Dayes. But tonight's gig, the band's first London appearance in 2018, presented the unadorned duo, who held the audience's rapt attention with seventy-five minutes of shamanistic intensity.

Boyd was onstage first, wearing a black t-shirt emblazoned with the message: "Smooth Jazz Sucks." The first piece, which had Golding first on soprano and then on tenor, rammed home the sentiment. It was uncharted water, without reference to any of the tunes from the albums. The remaining fifty or so minutes drew on all three albums, but with new paint jobs. It was a seamless blast and the audience was swept along, whooping and cheering as they went.

At the end of the set, in the band's first spoken announcement from the stage, Golding said that he and Boyd would be hanging out at the bar for a while, and to please come up and have a chat if you wanted to. "Press photos tend to show us as rather fierce and serious," said Golding, "but actually we're really friendly and approachable."

Experience has taught this writer that the maxim "never meet your heroes" is usually good advice (although Archie Shepp, Fela Kuti and Ahmad Jamal are among a select list of exceptions to the rule). Everything about tonight suggested it would be safe to meet Golding and Boyd without having any illusions shattered. Still and all, there was too much hanging on it to take the risk. So, like those News of the World journalists who habitually concluded their exposes of brothels with the words "I made my excuses and left," lest readers thought they had partaken of the services on offer, I made for the door. Next time. Maybe.