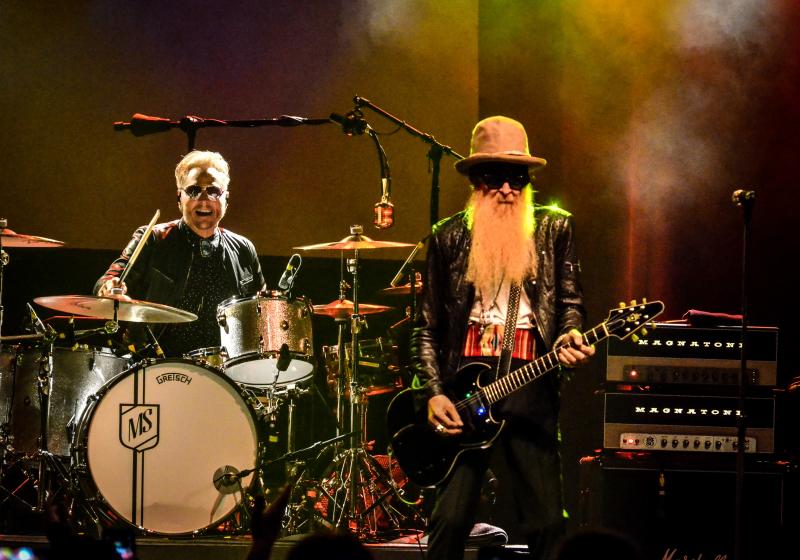 Jimi Hendrix said that Billy F. Gibbons was "America's best young guitarist" during an appearance on The Tonight Show with Johnny Carson. That's high praise and some pretty heady stuff.

Gibbons is best known as the lead guitarist for ZZ Top and for his trademark flowing beard. For the past forty-seven years, since the release of that band's first album in 1971, Gibbons has been delivering blistering guitar leads, riffs and runs on ZZ Top's signature blues, boogie-woogie, hard rock, barrelhouse, Southern rock, heavy metal, new wave, punk, and synth-rock tunes. These songs include: "Gimme All Your Lovin,'" "Sharp Dressed Man," "Legs," "Tush," "La Grange," "Waitin' for the Bus" and "Jesus Just Left Chicago." During the course of his career with ZZ Top, Gibbons has recorded multiple gold and platinum records, received numerous MTV Video Award nominations (and wins) as well as winning Grammy Awards in 1984 and 1987. Gibbons was inducted into the Rock 'n' Roll Hall of Fame as a member of ZZ Top in 1993.

On a cool Sunday night in late October, Gibbons, touring behind his latest solo recording The Big Bad Blues (Concord Records, 2018), along with drummer Matt Sorum and guitarist/bassist Austin Hanks, blew the roof off of Huntington, NY's, the Paramount. Gibbons latest solo CD pays homage to the lowdown and dirty blues made famous and released by the classic labels like Chess, Excello, Delmark, Cobra, Bluesville and Arhoolie. This concert did exactly that.

Gibbons and his band treated the mostly middle-aged crowd in the mid-sized venue to exactly what they came for—an evening of fantastic and fun blues with Gibbons signature driving guitar work and his growling, gravely vocals. Gibbons powerful playing and strong vocals were spot-on and the rhythm section of Hanks and Sorum drove each and every song. The show touched on all facets of the Gibbons canon and psyche. He played a sixteen-tune main set that featured songs made famous by his influences ("Route 66," Muddy Waters' "Rollin' and Tumblin,'" which appears on The Big Bad Blues, and "Treat Her Right"); ZZ Top classics ("Jesus Just Left Chicago," a joyous version of "Sharp Dressed Man" and "Just Got Paid") and solo offerings ("Missin' Yo' Kissin,'" which was written by Gibbons' wife, Gilligan Stillwater, and "Hollywood 151").

The encores reached heights that only the most optimistic could have imagined. The first song was an amazing and powerful cover of Led Zeppelin's "Whole Lotta Love" which, when Gibbons and company played its first notes, sent the crowd into a complete frenzy. The second encore tune was a driving boogie-blues version of the ZZ Top hit, "La Grange," on which the entire audience joined Gibbons on the "a- how-how-how-how" lyric, which had to be heard to be believed.

Though it, clearly, wasn't a ZZ Top performance, Gibbons is obviously most comfortable in a trio setting. As with ZZ Top, the band featured a fantastic rhythm section (Hanks has recorded his own rocking, country-soul CDs) with powerhouse drumming (Sorum has played with Guns N' Roses, Velvet Revolver, Kings of Chaos, the Cult and Tori Amos' early band Y Kant Tori Read). The group played a strong set of energetic straight-up blues and bluesy rock. The show was top-notch. Gibbons nailed every solo and his guitar rang though on every song. Hanks' bass and rhythm guitar thumped and reverberated along with Sorum's backbeat providing the perfect rhythmic foil to Gibbons' amazing fretwork.