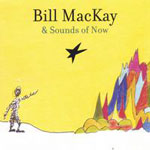 Jazz has always been a reflection of diversity and culture. It has grown to embrace the roots of ethnic music originating from global sources. Just as it has flourished in America, its branches have extended to encompass many other musical styles. Some of that can be heard on Sounds of Now, by Chicago guitarist Bill MacKay, who loosely defines the music as "broken or "garage jazz (relating the idea of a broken bottle into which various musical elements have seeped).

MacKay, a versatile guitarist, can play in modes ranging from mainstream to modern, as recently heard on violinist SavoirFaire's Running Out of Time. Now performing his own music, the sounds are more melodic, complex, and insightful. Like broken glass, the music glimmers, with its various shards illuminating influences like rock, blues, and folk music. This becomes apparent on "Soul in Violet as the quartet opens with a picturesque melody colored by the rustic presence of a banjo.

Giving way to a western rural motif, "Illumination is also marked by soulful playing and nice soloing by MacKay and saxophonist Greg Ward, with slight touches of free jazz and good interaction. MacKay's playing is skillful as he fills the spaces with intricate chords, thoughtful notes, and a pleasing tone on the gentle "Sleepwalking.

Overall the music is balanced by equal amounts of harmony and exploration, and everyone gets time to express themselves. The "garage presence comes into play on the closing "Serpentine, whose mellow rawness is filled with various textures, phrasings, and layered solos. If this seems a little hard to describe, that's because it is. Like a sponge, modern jazz soaks up a variety of sounds, and interesting and unique recordings like this one occasionally seep out.

This recording is available from CD Baby on the web.