By Marcia Hillman
January 22, 2010
Sign in to view read count 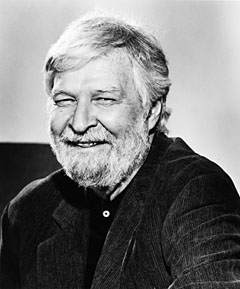 Bill Holman is a man with many milestones. Known primarily for years of unique and complex arrangements, Holman's continuing and long-running career as a composer and saxophonist reaches another milestone this month when he will be awarded the title of NEA Jazz Master. A California native, Holman took up clarinet in junior high school and tenor saxophone in high school where he was leading his own band. In the late '40s, after a stint in the US Navy and engineering studies at UCLA, he "decided to write big band music and enrolled at the Westlake College of Music in Los Angeles. I also started studying composition privately with Russ Garcia and saxophone with Lloyd Reese."

By 1949, Holman had started his career. After writing for Charlie Barnet, Holman began his association with Stan Kenton (for whom he would both compose and perform) in February of 1952. His first composition recorded by the Kenton band on Capitol Records was "Invention for Guitar and Trumpet." His arrangements and compositions for Kenton are legendary and "rhythmically hair-raising at times. I didn't appreciate the colors and textures in the band at the time, but it was an experience I treasure." During the '50s, he was also active in the West Coast jazz movement, playing in small bands led by trumpeter Shorty Rogers and drummer Shelly Manne and, in 1958, co-led a hard-swinging, New York-style band with Mel Lewis in the LA area.

During the next decade, Holman concentrated more on his writing efforts, giving up playing in 1967 because of "surgery on my lower jaw which made it impossible for me to play sax any more." Holman was writing for bands led by Louie Bellson, Count Basie, Bob Brookmeyer, Woody Herman, Buddy Rich, Doc Severinsen and Gerry Mulligan among others. He has also written for a long list of vocalists such as Tony Bennett, Mel Torme, Carmen McRae, Anita O'Day and Michael Bublé and also did writing for Natalie Cole's Grammy-winning album Unforgettable.

He became more active in Europe during the '80s-90s. "I was writing and conducting extended works for the WDR Symphony Orchestra in Cologne, Germany and the Metropole Orchestra in the Netherlands. That kind of traveling has been quiet of late."

Holman's recording milestones include 14 Grammy nominations and 3 Grammy Awards: Best Instrumental Arrangement of "Take The 'A' Train" for Doc Severinsen and the Tonight Show Orchestra (1987); Best Instrumental Composition for "A View From The Side" for the Bill Holman Band (1995) and Best Instrumental Arrangement of "Straight, No Chaser" for the Bill Holman Band (1997). He has been voted "Best Arranger" in the JazzTimes Readers' Poll four times and received the "Arranger of the Year" award three times in DownBeat Magazine's Readers' Poll and Critics' Poll.

In 2000, the Bill Holman Collection of scores and memorabilia became part of the Smithsonian Institution's permanent collection in Washington, DC. He was inducted into the Rutgers Jazz Hall of Fame in 2006 and in 2008 he received a Golden Score Award from the American Society of Music Arrangers and Composers as well as a place in the ASCAP Jazz Wall of Fame. He is also the man Andre Previn spoke of whose "true instrument is the orchestra and he plays it with musicianship, honesty and brilliance."

At age 82, the big band sound is still the driving force. "It does make a difference, however, who is in front of the band. I remember once when Dizzy conducted the Kenton band. It sounded totally different. But nowadays we have one of the best rehearsal bands on the West Coast. We concertize in the area, playing at whatever venues are around. I'm always writing charts on standards and originals. And if I come up with a concept for a new album, we might get into the studio to record." Holman considers jazz "America's unique contribution to the art of the world" and is committed to jazz education. With all of the jazz programs in so many schools, "the kids today have advantages we didn't have when we were coming up, but in some ways they are missing the experience we had of having so many music venues and jazz players. We had a lot of opportunity for on-the-job training and being able to sit in sometimes with some of the greats. There are still some places to play in the LA area, but the list is getting smaller. We still have to keep the music going some way."

As far as his newest career milestone, the NEA Jazz Master title, Holman is "proud to have my contributions recognized by the awarding of this honor. The list of past and present honorees contains most of my heroes and influences and to be included among them makes me feel humble and grateful."