...[A] single spring afternoon has been assembled as it deserved, an afternoon after which nothing was ever the same. 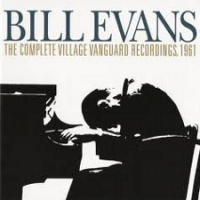 On the jazz side of things, the most cited live jazz recording by AAJ writers at the time was actually a pair of releases: Bill Evans Trio, Sunday at the Village Vanguard (Riverside 9376, 1961) and Bill Evans, Waltz for Debbie (Riverside 9399, 1961), constituting the contemporaneously available afternoon and evening performances of the Bill Evans Trio at New York City's Village Vanguard, Sunday, June 25, 1961. In my article addressing this performance, I wistfully mused:

That day has come.

Fantasy Jazz has released, in chronological order, the entire five- set session list from Bill Evans' June 25th, 1961 date at the Village Vanguard. Included here for the first time is the failed first take of "Gloria's Step (sporting a three second break in the recording and a great Scott LaFaro bass solo). The original release history for this music is the typical jazz release mess, with different takes being released on different LPs and or CDs. For a breakdown and analyses of the release history, I point the gentle reader to visit The Bill Evans Web Pages.

Bill Evans and Jazz Piano Since 1945

Bill Evans, with alter ego Bud Powell, defined the art of jazz pianism as performed today. In the same manner that Lester Young and Coleman Hawkins defined post-Swing tenor saxophone, Evans and Powell set the course of jazz piano in the years after World War II. Where Powell represents the muscular, virtuosic, and visceral, Evans represents the lightness of being, possessed of delicate intellect, touch, and spirit.

From the Bud Powell stream come pianists Red Garland, Horace Silver, Phineas Newborn, Elmo Hope, and Keith Jarrett. From the loam of Bill Evans emerged pianists Alan Broadbent, Lynne Arriale, Jessica Williams, James Williams, Fred Hersch, and on and on and on. Evans' shadow is a long one, stretching well beyond his relatively short life. Evans, the subject of this epistle well represented on compact disc in both the studio and live settings. Fantasy Jazz has provided the documentation of two complete live series of Bill Evans Trio music in the box-set releases:

The two latter of these three sets being devoted to Evan's performances at the Keystone Korner Bar, August 31 through September 7, 1980, just seven days prior to Evans' premature death on September 15, 1980 in New York City from consequences related to his decades-old heroin and cocaine dependencies. While these box sets represent important jazz documents, they, more than likely, cannot approach the importance of what was recorded that warm early Spring Sunday afternoon by three young men elevating the art of the jazz piano trio from cocktail music to classical chamber fair.

Philadelphian Paul Motian, the only surviving member of the trio, was 30 years old when he performed with Evans and LaFaro at the Village vanguard in 1961. Motian originally moved to New York in 1955 playing and recording with Thelonious Monk, Lennie Tristano, Coleman Hawkins, Tony Scott, and George Russell before becoming consistently associated with Bill Evans, with whom he would largely spend the next eight years. After leaving Evans in 1963 to play with Paul Bley, Motian freelanced with the likes of Mose Allison, Charles Lloyd, Carla Bley and Charlie Haden before truly hitting his stride with his Electric Bebop Band as well as Masabumi Kikuchi's Tethered Moon. Motian is a master of understatement and color. He is unobtrusive, allowing the harmony instruments to pad across his brushed rim-shots and ride cymbals. His playing with Evans could be considered "impressionistic if such an adjective is applicable to jazz drumming.

The youngest member of the trio, Scott LaFaro, well may have been the most talented, promising and tragic. Born in Newark, New Jersey, LaFaro first studied the clarinet and tenor saxophone before switching to the double bass, and instrument he was to transform from a Swing- era timekeeper to the near solo equivalent to the piano. In his life, the only bassists comparable might have been Charles Mingus and Charlie Haden. LaFaro wasted no creative time. Like Mozart and Schubert, he quickly left his tracks of influence everywhere he went, whether that be on the West Coast with Marty Paich, Art Pepper, Stan Kenton, or Stan Getz or on the East Coast with Buddy DeFranco, Tony Scott, Ornette Coleman (playing on the epochal Free Jazz) or Bill Evans. In six short years, Scott LaFaro quietly kicked asses, took names and then threw the list away on July 6, 1961, at the age of 25, less than three weeks after the historic Vanguard date, wrapping his car around a tree on New York State Route 20 between Geneva and Canandaigua.

Born and reared in Plainview, New Jersey, Bill Evans began his formal music training at age six. He was classically trained on piano and studied flute and violin. After high school, Evans was purloined by the South, attending Southeastern Louisiana University on a flute scholarship. While in college, Evans assimilated a thorough understanding of music theory. He played in the college marching band, and also led his football team to a league championship as a quarterback. Evans graduate in 1950 with a piano major. He went on the road with the Herbie Fields band, but was drafted into the military and assigned to the Fifth Army Band near Chicago.

When discharged three years later, Evans went to New York City in 1954, supporting Tony Scott in the clarinetist's quartet while pursuing postgraduate studies at Mannes College. While at Mannes, Evans met modal composer George Russell, who would influence Evans' playing profoundly thereafter. A couple of years later, this modal influence would be fully tempered by an eight month stint with another jazz icon, Miles Davis.

At the time of the Vanguard recordings, Evans was in the middle of a very productive period of his professional life. Between May 3, 1958 and April 6, 1959, Evans performed with the Miles Davis sextet and recorded Kind of Blue with the trumpeter. Evans' experience with Davis would yield the Evans' composition "Blue in Green and the adoption of several Davis compositions into the pianist's book (I cite "Solar and "Milestones from the Vanguard sessions). Wedged in between recording dates with Modern Jazz Quartet rhythm section (bassist Percy Heath and drummer Connie Kay) supporting Julian "Cannonball Adderley (Cannonball Adderley, Bill Evans— Know What I Mean? Riverside, January 27th and March 13th) is the brilliant Oliver Nelson sessions for Blues and The Abstract Truth (Impulse!, February 23rd). Also wedged into the same period were the Evans/LaFaro/Motian sides for Explorations (Riverside, February 2nd).

This recent history issued the 31-year-old Evans into the Village Vanguard with his current working group that Spring Sunday Afternoon, for what was ostensibly just another date to make a living as a musician in New York City. Orrin Keepnews was on hand at the club earlier than the trio with engineer David Jones to set up the Ampex portable tape recorder. The pair placed the recorder at a table close to the stage, enabling them to maintain eye contact with the band (rather than recording in the traditional way with the recorder and engineer in the kitchen, out of sight). The result is the intimate atmosphere of the Village Vanguard fully restored with this new remastered and reordered release. Sonically speaking, I was at first not impressed with the sound. It was not until I had the opportunity to listen to this set on headphones that I was able to appreciate the true Truth of the recordings. Replete with tinkling glasses and audience patter, and with the restoration of the original order of performance, these sets are again placed in their proper context. The sound is exceptional and may prove to be the best results of the Fantasy 20-bit remastering efforts.

So refocused is the sound of this recording that the previously unreleased, flawed first take of "Gloria's Step is perfect in its imperfection. As so many words have been written and read about this recording, I want to focus on the two pieces finding themselves in three of the five sets captured on these three compact discs. The first, "Gloria's Step, is a Scott LaFaro composition that illustrates well the empathic relationship of this particular trio. It is significant that LaFaro contributes more original material to these sessions than does the leader. Had LaFaro lived, he would have doubtless become a leading jazz composer. LaFaro's compositions ("Gloria's Step and "Jade Visions to Evans' epochal "Waltz for Debbie") betray a conservative compositional approach that provides melodies easily manipulated by the trio. It also evidences the near counterpoint nature of Evans-LaFaro interplay during the beginnings and endings of the pair's solos. The transition between head figures and solos is blurred to the point of elimination. Flow might be the best term to describe the performance progress. Melody fragments flow one into another as do solos and solo space.

The second piece afforded three readings in these sets is Cole Porter's "All of You. All three takes clock in at greater than eight minutes, among the lengthiest performances on the set. In these three takes, Evans digs deep, exposing the swing in Porter's balladic melody. Where "Gloria's Step typified "flow, "All of You defines a eutectic mixture with each musician dissolved in the others. Seamless comping behind soloists and extended recitals by LaFaro and Motian make "All of You a juggernaut (if any Evans' performance may be defined as such). This is a true concert piece, one intended to show off all of the wares of the group collectively and separately.

The essential nature of this music is hard to over-estimate or lose in hyperbole. These three compact discs of jazz piano trio music, like Robert Johnson's 29 compositions or Bach's The Well-Tempered Clavier should not simply be considered as simply musical masterpieces, but cultural masterpieces. Finally and appropriately, a single spring afternoon has been assembled as it deserved, an afternoon after which nothing was ever the same.

CD1: Spoken Introduction; Gloria's Step (Take 1, interupted); Alice In Wonderland; My Foolish Heart; All Of You (Take 1); Announcement And Intermission; My Romance (Take 1); Some Other Time; Solar.