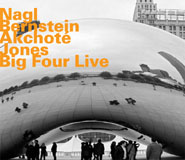 And it proves to have been a eureka moment. Simultaneously cerebral and swinging, and never losing the sense of play which runs through the Bechet group's recordings, Nagl's band—light years away from sterile revivalism—is a resounding affirmation of the creative potential of the post-modern imagination.

The rich mix of history and genre central to the group's remit is enhanced by the individuals involved, who by design—and, no doubt, some serendipity—mesh into a magically inventive unit far bigger than the sum of its parts. Nagl himself, best known for less traditionally-inspired projects than this, is convincingly at home in a sweep of settings including New Orleans, blues and new thing impressionism. He leads not from the front, but from the ranks, and gives at least as much mic-time to trumpeter Steven Bernstein as he does to himself.

Bernstein, founder of Sex Mob and since involved in a variety of other mutant groove projects, balances Nagl's instinctive art-house inclinations with a growling, gutbucket style which, in the low register, gives his horn the quality of a New Orleans tailgate trombone. Other leaders who've called on Bernstein's empathy with New Orleans pioneer jazz include singer/songwriter Rufus Wainwright, who hired him to arrange the title track of Release The Stars (Geffen, 2007). Bernstein's playing is heavenly throughout—and it would be hard, anyway, not to enjoy someone who titles three of his tunes "New Viper Dance," "Teahouse Tango" and "Muggles 2000."

Guitarist Noel Akchote is another stone delight. His playing reveals influences from Derek Bailey through Muddy Waters, with a little bit of Echoplex-pioneer Sandy Bull thrown in for extra spice. But the resulting, arresting mélange is entirely his own. His tone is warm, full and resonant, even on the sharpest top-end shards. His improvisations are unfailingly melodic, often prettily so, and his lines long and architectural. Bassist Bradley Jones, who has to stoke the boiler without the aid of a drummer, does that and a lot more. He's another melodic soloist who makes his instrument sing.

Big Four Live was recorded at Jazzfestival Willisau in September 2005, and five of its nine tracks—Bernstein's reefer trilogy and Nagl's "Big Four" and "Monx"—are tunes from the band's first album, Big Four (Hat Hut, 2002). Whether it's the time-warped thematic counterpoints and improvised duets of Nagl and Bernstein, the ever inventive comping and soloing of Akchote, or the sense of fun which pervades all the music, there is plenty here to enjoy and return to. File alongside tenor saxophonist Archie Shepp's Mama Too Tight (Impulse, 1966), perhaps, for contrast.