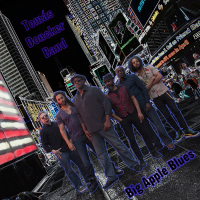 The album begins with a bang; the introduction to "Big Apple Blues" belies how mellow the song itself is, but the staggering energy sets the tone for the conviction and gutsiness of the band's vibe. The atmosphere here is classic blues with a little more depth, both from Doncker's subtle songwriting flourishes and Komunyakaa's colorful lyrics. "A New Day" has a similar musical energy. It's medium slow tempo and impassioned playing highlight the beautiful storytelling in the hopeful lyrics, as does Doncker's effective musical setting and arrangement.

Doncker is just as at home with heavy playing as he is with more upbeat songs, and in fact he shines in these instances, channeling classic rockers like Hendrix. Tunes like "Hellfighter of Harlem" and "Ground Zero" are good examples of this kind of playing and recall some of Hendrix's classics from the Band of Gypsies era. Both these tunes feature lyrics that deal with violence and war, which is a common theme in the poetry of Komunyakaa, inspired by his time serving in the Vietnam war. "Hellfighter" proclaims "Study war no more," "Fightin' Jim Crow over here to fight a war over there," and includes a spoken word interlude about WWI. The backbeat driven groove and heavily distorted guitar set the atmosphere.

More lighthearted tracks include "Can't Say No," with its playful, bouncy groove and "Fun City" which is more akin to an R&B or soul track along the lines of something Curtis Mayfield may have done. One of the highlights of the record is also one of the feelgood tracks on the album. The laid-back "Coney Island" is a happy 12/8 throwback reminiscent of some poppy tunes of the 60's, with vivid lyrics recalling good memories with a dreamy air about them, with Doncker singing "Do I still exist?"

Doncker's second full length album under his own name is a solid effort with impressive songwriting and playing. Komunyakaa's lyrics are a huge draw here too; the award winning poet's meditations, stories and discussions lend the music an unprecedented level of depth. Definitely a record worth checking out for fans of rock and blues guitar.