Skip Heller: Beyond These Hills: The Skip Heller Anthology 2017-20 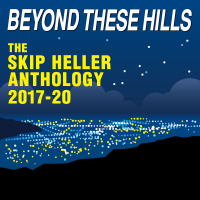 In terms of national exposure, Fred "Skip" Heller has always hidden in plain sight. Predominantly known in his native Philadelphia and adopted-native Los Angeles, Heller is a musician / composer / producer of note and has been for twenty years. He deserves wider notice if for no other reason than he shares much in common with Randy Newman—he captures the indelible American Spirit in song, warts and all, using the melodic vehicles struck from the heart of America. Heller has always been a thoughtful producer of music, one liking to provide periodic summaries of his most recent output in regularly released retrospectives.

Heller began his documentation quest with The Essential Skip Heller: Career Suicide 1994 to 2001 (Dionysus Records, 2002), followed by It's Like That: The Organ Trio Anthology 1998 to 2004 (Jewbilee, 2004). Heller's 2004 to 2008 period, where his organ combo bayoneted lesser expressions of Americana, remains uncollected while his most fruitful period is drawn together on That was Then: Collected Recordings 2008-2017 (Self Produced, 2017).

Documenting his output for 2017 to 2020, Heller releases Beyond These Hills: The Skip Heller Anthology 2017-20. This anthology picks up with Heller's stint with Birdie Jones and the Carnival of Soul and the release Let's Start Tonight (Carnival of Soul Music, 2018), reprising the title cut, "Together Too Long," "The Other Shoe," and "Who Needs Love." Heller once said he liked the anthologies because they enabled him to remove the "dead wood" in his catalog. It also offers him the opportunity to release previously unreleased recordings as well as reconsidering past projects. An example of the latter is his re-scoring "Let's Stay Home," originally released on Foolish Me (Weatherbird, 2012). In many ways this is the perfect Heller song. It captures a languid summer sprint where the protagonist is convincing a significant other that they need to slow down and just stay in. The music is like a salve, gentle and soft.

Birdie Jones duets on the previously unreleased chestnut, "Dream a Little Dream," rendered with just the proper sepia tint. Heller's instrumentals are compelling: "From The Night Before" is a jazzy, mid-century modern tune displaying Heller's crack horn charts, while "The Other Shoe" has the drive of a soundtrack segment framing the quick passage of time. Heller's guitar playing is piquant and intelligent, not flashy, but with a very high IQ. Revealing is the brief coda Aspen Snowboards X-games Commercial Spot. Like Heller's recent The Reckless Night Ensemble's Radio Music of the Future (Weatherbird, 2012), this is where Heller really shines as an artist. It is always a treat to see what Skip Heller is up to.

Hall of Fame; I’ve Been Wrong Before; Beyond These Hills; Let’s Stay Home; East Side Club; From the Night Before; Dream a Little Dream; Nothin’ to See Here; Together Too Long; The Other Shoe; Let’s Start Tonight; Waho Needs Love; Happy Anniversary; Aspen Snowboards X-Games Commercial Spot.