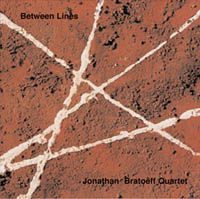 While it's most talked about right now for the thrilling fast-forward postmodernism of Pete Wareham's Acoustic Ladyland and Sebastian Rochford's Polar Bear, this album from French-born guitarist Jonathan Bratoeff is a reminder that London's F-IRE collective is neither monochrome nor monolith, but a multicoloured assembly of individuals and aesthetics. The twenty or so musicians at the collective's core are indeed all card-carrying apostles of experiment, adventure, and, to varying degrees, inclusion, but there are evolutionists as well as revolutionists amongst them, each taking his or her own path towards a new jazz nirvana.

In this context Bratoeff is an evolutionist, with one foot in the future and the other in the tradition. His clean-picked, mostly FX-free, rapid-fire runs carry echoes of Johnny Smith and Jimmy Raney, while his taste for abstraction and astringency is reminiscent of Lee Konitz and Lennie Tristano—and a fellow F-IRE artist, saxophonist Ingrid Laubrock. Between Lines is unadorned, uncompromising, mostly through- improvised music, and like Laubrock's river deep recent album Forensic is by turns, and sometimes simultaneously, warm and edgy, sunlit and dark cornered, passionate and cerebral.

Wareham and Rochford drop effortlessly into Bratoeff's groove, their cranked-up rude boy iconoclasm tempered by measured, slow burning performances (although Rochford's two-minute solo introduction to "Conscience" is a reminder of his trademark ferocity-with-brains approach). On the bossa nova-ish "Far Away" things even get mellow, with Wareham suggesting Getz's carefree on-the-road-to-Rio excursions. But most of the tunes inhabit a more emotionally charged place, like "NY," evoking Manhattan's adrenaline-fuelled atmosphere, or "Lignes," a kind of 21st Century distillation of "A Love Supreme."

After studying at the Aula de Jazz de Barcelona, Bratoeff moved to London in 1998. His first album, '01's Episode, also featured Wareham, along with the lower-profile but astonishing F-IRE cellist Ben Davis, and this quartet came together after Bratoeff, Wareham, and Rochford studied together at New York's School for Improvisational Music in '02. Bratoeff also leads a quintet featuring Ingrid Laubrock on tenor saxophone and Tom Arthurs on trumpet, another all-stars-of-the-future lineup (it's a certainty).

But hotel, motel, Holiday Inn, if it's the eternal verities of in-the-moment improv and interaction you're after, you need look no further.