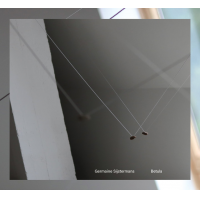 Given that past albums on the Elsewhere label have already featured such Wandelweiser favourites as Dante Boon, Jürg Frey, Anastassis Philippakopoulos, Michael Pisaro-Liu, Stefan Thut and Guy Vandromme, it was no surprise when the label released Betula, the debut album from Dutch composer and clarinetist Germaine Sijstermans. Her track "M" had already appeared on the album Amsterdam . Berlin . Moscow (Edition Wandelweiser, 2021), which was curated by Boon who also contributed two pieces alongside those by Sijstermans, Seamus Cater, Rishin Singh, Gabi Losoncy, Kirill Shirokov and Samuel Vriezen. Recorded at Roepaen, Ottersum, in Holland, in early September 2019, Betula is a double album, with a running time of a- hundred-and-three minutes, comprising six pieces composed by Sijstermans between 2017 and 2019, one piece "A Song" opening and closing the album in subtly different versions. All the music is played by six musicians who had worked closely together since the start of this project—Sijstermans on clarinet, Singh on trombone, Antoine Beuger on flute, Johnny Chang on viola, Fredrik Rasten on guitar plus ebow, and Leo Svirsky on accordion. All of those instruments can produce sustained notes and do so throughout the album. Despite there being six musicians, most of the time only one is playing apart from during transitions when two overlap. In addition, there are occasional brief pauses between instruments. This uncluttered methodology means the compositions are true to the Wandelweiser practice that the beginning, middle and end of each note can be clearly heard and savoured. Although the musicians are mainly heard individually, having six very different sounds gives the soundscape variety and keeps it fresh. Significantly, the album title, Betula, translates as 'birch tree' while two of the track titles, "Jasminum" and "Lavendula," are the names of plants, jasmine and lavender; those two tracks are extended pieces which together account for over half of the album and are its heart. The botanical titling serves to emphasise the slow, gentle evolution of this music, with every step along the way contributing to the end result, beautiful music. Although debut albums often lead to the conclusion that the artist or composer shows promise, in Sijstermans' case that is not so; she is already the finished article and, on this evidence, has a bright future ahead of her.

A Song; Jasminum; Untitled; Lavendula; M; Call, there; A Song