By Dave Nathan
February 1, 2002
Sign in to view read count 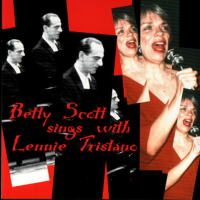 This album compiles the output of five recording sessions vocalist Betty Scott had with one of the creators of modern pianism, Lennie Tristano. They were made in Tristano's Hollis, Queens studio beginning in 1965 with the last one in Jan 1974. There are two questions (at least) these sessions raised. First is "who is or was Betty Scott?." I could find no reference to her on the Internet or in any of the standard and nonstandard jazz vocal references at my disposal. The second more puzzling question is why these sessions took place in the first place. Tristano had stopped recording for public release in the late 1960's and made his last public appearance in 1968. Was he bored? Did he want to record with a vocalist? If the answer to either or both of these was "yes," then he could have exercised better taste in selecting a singer, one that was more accommodating to his advanced style (for that time) of pianism. Scott is pedestrian at best, at least in delivering on this play list of standards all done at a slow tempo. Even tunes like "It Could Happen to You" which is sometimes done at medium tempo, gets the dirge like treatment.

Perhaps the play list and the requiem manner in which Tristano was playing, laid an impossible task on Scott. There was very little opportunity to vary her delivery. Moreover, Tristano often plays as if she isn't there as he indulges his block chord technique to create all sort of improvisation on the melody line. His harmonious meanderings are worth the price of the album alone. Listen to him digress on the melody line of "Stairway to the Stars." If his playing supports the singer, it's not by design, but by coincidence. Scott does break the mold on a few tunes such as "Like Someone in Love" where the pianist lays off on the embellishments and lets the singer take the lead. But it's mostly Tristano's show and maybe that's the way he wanted it, treating Scott's voice as his accompanist rather than the other way around.