By Dan McClenaghan
November 11, 2017
Sign in to view read count 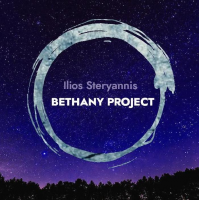 Toronto-based drummer Ilios Steryannis calls the sounds on his Bethany Project "World Music From the Heart."  Thes sound is a musical stew stirred up from Afro-Cuban rhythms, the Mediterranean sounds, John Coltrane, and ebullient West African percussions (and more), spiced with danceable funk and bebop, and drawing influences from, by turns, Gabriel Garcia Marquez' One Hundred Years of Solitude, Macedonian sounds, and—on "The Ornado"—the whirlwind motions of the leader's four year old son.

That's a big world to draw from. The potential for a lack of a cohesive vision from the use of such a broad pallet could have drained off the artistic and thematic focus. But it didn't. With superb arrangements, consistently catchy tunes and the highest level of musicianship and ensemble virtuosity—the sum of the parts creating  uplifting atmospheric—Steryannis and his mid-sized groupings have created a  marvelously engaging world music/good time sound.

The disc closes with "Soledad," inspired by the Gabriel Garcia Marquez masterpiece, One Hundred Years of Solitude, a laid-back Afro-Cuban groove that suggests a  peaceful twilight in the mythical Macondo.