BY DOUG COLLETTE
November 12, 2017
Sign in to view read count 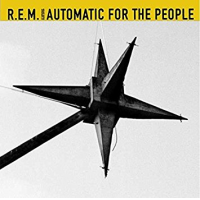 If the anniversary packages of R.E.M.'s discography, like Automatic For The People, seem to be arriving in quick succession, that's because the band hit an extraordinarily prolific stride around a quarter century ago. Breaking beyond the boundaries of their previously-established and recognizable style with Green (Warner Bros., 1988), the foursome continued into the next decade writing, playing and producing at a sufficiently ingenious level they rendered moot the glib label 'jangle-pop.'

Each of the multiple configurations of the twenty-fifth anniversary release of Automatic For The Peoplecarries it own respective sense of logic, but at the same time maintains continuity with the others. So, twenty studio outtakes populate half the four-disc package with a Blu-ray, along with the original album remastered from the analog tapes by Stephen Marcussen. after a remix in the new Dolby Atmos format, as overseen by original producer Scott Litt: these sonic improvements benefit all twelve tracks, but especially those such as "The Sidewinder Sleeps Tonight" on which the dense production previously sounded almost impenetrable (even as lead vocalist Michael Stipe's voice remained prominent in the mix).

As with the double-CD issue, the 'Deluxe Edition' also includes a full performance, Live At The 40 Watt Club 11/19/92; performed in R.E.M.'s hometown of Athens, GA, it was the band's only public concert that year. The band had wisely chosen not to tour as means of support for their previous album, a steadfast declaration of faith that what they accomplished in the studio could and should stand on its own terms. Yet it doesn't deny that stance that R.E.M. chose to include what would become standout tracks from the record in this live offering: "Everybody Hurts" and, to a lesser extent "Drive," would become representative of this group's continuing D.I.Y. stance.

The inclusion of "Radio Free Europe," from the foursome's initial long-player Murmur (I.R.S., 1983) stipulated in no uncertain terms that these favorite sons of this Southern college town had not lost track of their roots. But just as clearly they were also justifiably proud of their most latest work, as well as that of recent vintage too: this is a rousing take on "Finest Worksong," from the group's mainstream breakthrough album Document (I.R.S., 1987). And all that said, Buck, Berry, Mills and Stipe remained quirky in ways small and large: the band kicks into the homestretch of this set with a cover of the Troggs' "Love Is All Around."

Such was this this discriminating choice from a band whose taste in all things musical was thus reaffirmed. yet again. over ten years into their history. And not just by following their own instincts: Led Zeppelin's John Paul Jones fashioned the orchestral arrangements for select tracks including "Nightswimming," while both the album as a whole and its aforementioned singles were afforded Grammy nominations. Catchy as it is, "Man on the Moon," may have sound conventional, yet its subject matter (the supremely idiosyncratic comedian Andy Kaufman) is anything but: such a delightful pairing of opposites is wholly congruent with R.E.M.'s own collective persona.

The flurries of activity devoted to this anniversary release of Automatic For the People, as readily apparent on social media, simultaneous with a corresponding public relations campaign unlike those accompanying previous such archive releases, suggests one of two things (or perhaps a combination of both): a less than satisfactory sales response on previous issues, including last year's Out of Time (Concord, 2016) or an insecurity on the band's part regarding their status in contemporary rock history. On the former front, it'd be interesting to compare figures, but ultimately a numerical count is of far less import than the fact vault titles like this one reinforce R.E.M.'s status as one of the greatest rock and roll bands America's ever produced

CD 1: Automatic For The People (Remixed/Remastered) - Drive; Try Not to Breathe; The Sidewinder Sleeps Tonite; Everybody Hurts; New Orleans Instrumental No. 1; Sweetness Follows; Monty Got A Raw Deal; Ignoreland; Star Me Kitten; Man on the Moon; Nightswimming; Find the River. CD 2: Live At The 40 Watt Club - Drive; Monty Got A Raw Deal; Everybody Hurts; Man On The Moon; Losing My Religion; Country Feedback; Begin The Begin; Fall On Me; Me In Honey; Finest Worksong; Love Is All Around; Funtime; Radio Free Europe.