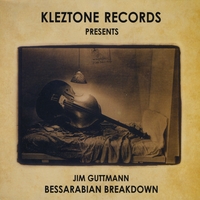 Surely Bessarabian Breakdown is a contender for one of 2010's most interesting albums . It has been a year for a sort of mini-revival of roots music, and klezmer has received wide attention—as much as the blues and other folk music. Against that backdrop, Jim Guttmann's Bessarabian Breakdown must be well received. It is a sleek production that sings passionately of a music that arguably originated among the Levites in Biblical times. However, the repertoire that has been handed down was developed and refined by more renowned Ashkenazi folk klezmorim into the enduring song and dance as it is served up today in South Eastern Romania, in a region known as Bessarabia.

Classicists, among them Gustav Mahler, and modernists like Aaron Copland and Leonard Bernstein, have been influenced by klezmer's infectious rhythmic cycles. George Gershwin acknowledged the klezmer clarinet when he wrote "Rhapsody in Blue," and the glorious parallels between Brasilian choro and other Latin forms of music are authentic. Indeed this makes klezmer truly approachable and a genuine influence on much of today's music across all sensibilities and forms.

This must account for the growing popularity of the music. Jim Guttmann makes that point rather obliquely on this album, which rearranges some of the most outstanding songs in klezmer repertoire. Guttmann, of course, puts such an original stamp on this music that he virtually makes it all his own. With firm and authoritative accents from his bass and superbly original arrangements for pianist Art Bailey, clarinetists—among them Alex Kontorovich—and trumpeters, who shine in the band that Guttmann fronts, this album swings brightly and sobs eloquently when it must. Additionally there is the repertoire itself.

The wonderful quick step is set in motion with "Philadelphia Sher," and the brisk, 2/4 song sets proceedings alight. Ziggy Elman and Johnny Mercer's "And the Angels Sing" is a swaggering vehicle for the resonating bass of Guttmann. The bassist has a fine sense of melodic wing and at times recalls the fascinating swing of Ray Brown. Art Bailey shares the stage with Guttmann with a short, but harmonically memorable solo here as well. Guttmann returns on "Firn Di Mekhutonim Aheym" for a fascinating, brooding solo. And the familiar music of "Bb Freylekhs...," in its exciting 8/8 meter, and "Dark Eyes" are two other tunes that contribute to the unforgettable nature of this album.