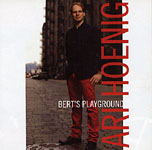 The varied contexts in which drummers play make their own sessions as leaders either spottily uneven or dynamically diverse. For Bert's Playground, drummer Ari Hoenig has gathered a troop of six musicians that includes two bassists, guitarists and saxophonists that he mixes and matches to illuminate the fun to be had.

Hoenig eerily conjures up a drum solo version of "Round Midnight" then joins Kreisberg and Fleming for a reinterpretation of Wayne Shorter's "Fall." The title cut is an apt potpourri of post-bop rhythmical playscapes. "For Tracy" again has Hoenig and Kreisberg combining for a gorgeous and leisurely slide. "Green Spleen" is a deliciously funky and wild tenor/guitar seesaw. And Gershwin's "Embraceable You," delicately interpreted by Hekselman's guitar, is a tender reminder that it is time to call it a day. A major aspect of what holds this session together is Hoenig's understated style. He leads not with bravado but with a wonderfully exquisite touch, allowing his band mates to cavort.