By Troy Dostert
February 17, 2022
Sign in to view read count 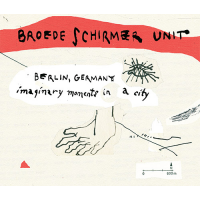 Listeners continually on the search for new instrumental configurations in jazz would be well-advised to check out the Broede Schirmer Unit. On the one hand, these four Berlin-based musicians walk in well-trodden territory, with a commitment to working within both composed and free musical forms; bassist Jan Roder and drummer Bernd Oezsevim have extensive experience in the European free jazz circuit. But it's the unique textures provided by the other half of the quartet that give the music its distinctive character: namely, the superb clarinet/bass clarinet work of Tobias Schirmer and, last but not least, the remarkable contributions of Matthias Broede, who doubles on piano and harmonica throughout the recording. This lineup is quite effective in disrupting the settled expectations one can bring to a session of free improvisation, pushing beyond cliches and opening up some genuinely new possibilities for exploration.

With six cuts on the album, four composed by Broede, it seems fair to credit him with the dominant vision behind the group's aesthetic. It's a capacious sound, with a great deal of freedom but with improvisations that remain centered in a melodic logic. Sometimes it's Schirmer's winsome clarinet that provides the tuneful fulcrum, as on the affecting opener, "Prominent Promenade on Planufer," a lovely twelve-minute excursion that highlights the quartet's capacity for close listening. Broede's graceful piano merges beautifully with Schirmer's patient flights, with Roder and Oezsevim offering just the right coloration; but that's just the first half of the piece, before an animated solo from Roder segues into Broede's harmonica ostinato, which in unison with Schirmer now becomes the basis for a compelling off-kilter groove and some simpatico mutual soloing from Broede and Schirmer. And then the quartet makes room for yet another detour, with a swinging, post-bop motif supporting an outstanding harmonica solo before the piece finally draws to a close.

"Sommerfrische Humboldt" is another multifaceted track, beginning jauntily with a gentle stroll, before a pensive rubato section that soon transitions into hard-driving swing and some thunderous exclamations from Broede, then finally exiting via a return to the main theme. The group's uncanny ability to inhabit these divergent modes while retaining a fundamental integrity is proof of its well-honed, cohesive sound.

The shorter cuts reveal other dimensions of the group's approach. Broede brings a folkish charm to his harmonica on "Two im Monbijou," a poignant duet with Schirmer, this time featured on bass clarinet. The contrasting textures between the instruments are essential to its appeal, as is also the case on "Please Cross at Kaisersteg!," another track tracing a potent melodic arc. "Viktoria Goes Parking," by comparison, produces a vigorous punch, with a great deal of energy stemming from the Broede/Schirmer axis, as these two are locked in tight, seemingly anticipating each other's moves without fail. And the closer, "West Ending," has more of the group's Janus-faced approach, with a freely-improvised first half transitioning seamlessly into a composed remainder offering yet more surprises to finish the album. The Broede Schirmer Unit offers an abundance of strong music, but one senses that these guys have a lot left to say.