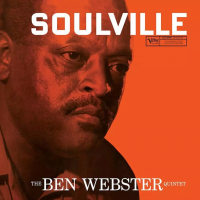 I accidentally lucked into the music of Ben Webster while sifting through the "W" section of some dusty used record bin years ago. The cover looked cool, with its classic profile shot of an unsmiling, world-weary Webster featured beneath the boldly printed title, Soulville. I impulsively bought the disc, took it home, and a few days later got around to playing it. Whoa! Had I stumbled onto something BIG? From that record on, I no longer thought of jazz as just another category of shopping music. Never before had I heard such soulful, sensual, bluesy sounds, and I haven't since.

It was Webster's tough, raspy, growling tone that caught my teenage attention. The album opened with a pair of low-down and dirty blues, "Soulville" and "Late Date," which vividly conjured up romantic mental pictures set in black and white, after-hours clubs and smoke filled bars that I had only seen in old movies. Then I got my first introduction to a Ben Webster ballad. He was a master of the ballad, blowing with a distinctively breathy, warm-toned, soulful and sensitive voice. Like Billie Holiday, Webster could transform a corny ballad into a poignant work of beauty. On the lovely "Time On My Hands" and "Where Are You," Webster plays 10 notes when other sax men might have used 100, but all 10 hit you in your soul. Memorable stuff, especially for an impressionable kid.

On this 1957 session, the great tenor-saxophonist met up with Oscar Peterson's group, which included bassist Ray Brown, guitarist Herb Ellis, and drummer Stan Levy. Their playing in support of Webster was incredibly sympathetic, with Peterson having the sense to reduce the quantity of notes he typically would put into his solos (with the exception of his snappy solo on "Late Date"). At the time, I didn't know that Webster was considered one of the "Big Three" of swinging tenors (along with Coleman Hawkins and Lester "Prez" Young). I also didn't know that his timeless playing was somehow considered out-of-style by the time he recorded Soulville. All I knew was that I couldn't stop playing track 6, "Makin' Whoopee," a song so supremely soulful that I still think it puts the classic Ray Charles version to shame. This music spoiled me.

I thought all jazz sounded this good. I've spent years trying to track down other artists whose music could move me as profoundly as a Ben Webster ballad. I'm open to suggestions. For those who prefer to save some time, look no further than this album.

Soulville; Late Date; Time on My Hands; Lover, Come Back to Me; Where Are You?; Makin' Whoopee; Ill Wind; Who?; Boogie Woogie; Roses of Picardy.