BY C. MICHAEL BAILEY
January 2, 2019
Sign in to view read count
The only appropriate person to tell the story of Ben Sidran is Ben Sidran. And, that is exactly what he did in his "autobiography/memoir" Ben Sidran: A Life in Music. The book is also the perfect companion to Ben There, Done That: Ben Sidran Live Around the World (1975-2015), a 3-CD retrospective of Sidran performing in a variety of formats that only a Renaissance Man like himself could achieve.

Ben Sidran is not exactly a household name, yet he pretty much is. In turns, he has been (and remains) a jazz and rock keyboardist, producer, record label owner, and music writer. Early in his career he was a member of the Steve Miller Band, maintaining a long standing relationship with Miller and band member Boz Scaggs. This is where Sidran crossed my plane of awareness -from the LP sleeves of the Steve Miller Band recordings: Children of the Future (Capitol, 1968); Brave New World (Capitol, 1969); Your Saving Grace (Capitol, 1969); Number 5 (Capitol, 1970); and Recall the Beginning...A Journey from Eden (Capitol, 1972)—all before 1973's The Joker (Capitol) and 1976's Fly Like An Eagle (Capitol) would make Miller the precious darling of every canned Classic Rock radio station. Sidran popped up elsewhere, always as that name I could never properly place.

Briefly, Sidran's personal and professional lives have been studious and literate. Sidran was born in Chicago in 1943, growing up in Racine, Wisconsin. He attended the University of Wisconsin, where before earning his degree in English I Steve Miller and Boz Scaggs in a band called the Ardells. Later, after Miller relocated to San Francisco, secured a recording contract, he sent for Sidran to join him in the Steve Miller Band , taking the keyboard chair previously held by Jim Peterman. Sidran contributed to the Steve Miller Band as described above.

Somewhere in the middle of all of this, Sidran studied for a Ph.D. in philosophy/musicology (American Studies) at the University of Sussex, writing his doctoral thesis on African-American culture and music in the United States. The thesis was published to positive critical response in 1971 as Black Talk. that time, Sidran has released a number of solo albums in a cool, easy swinging style similar to Mississippi-borne Mose Allison. This is absolutely no surprise as Sidran produced several late recording of Allison shortly before that singer's death. Sidran produced the big and the small and he did each with equal fervor. He is a music writer, that crazy profession for which few recognise a need (Yikes!). He was most noted for his Peabody Award Winning Series on NPR, Jazz Alive and later, New Visions on VH1.

Then, there is Sidran the musician. An embarrassment of riches was provided this humble midwesterner. Sidran has greater than 35 solo recordings in his discography, his most recent, Ben There, Done That: Ben Sidran Live Around the World (1975-1915), being considered below. Sidran's memoir, Ben Sidran: A Life in Music, provides his personal detail to all of this, His writing style mimics his singing, conversational: once folksy, next erudite. He never shows off because he never has to. His bibliography and discography speak for themselves. The book is a breezy but detailed read through both a pivotal period in popular and jazz music. That he is still living is our grace. Some gifts just keep on giving... 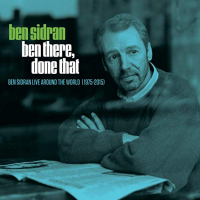 Ben There, Done That: Ben Sidran Live Around the World (1975-2015) is a previously unreleased live retrospective of Ben Sindran's career, curated by Sidran and co-produced with the Svengali Zev Feldman, the genesis of so many archival releases on Resonance Records, Reel to Real, and now Sunset Blvd. Sidran the musician deserves much more exposure. Represented herein is 40 years of Sidran's personal musical career, revealing a hipness and zest that is both infectious and informing. His stage banter on the 2015 performance "The Groove is Gonna Get You" shows him beautifully full of himself and therefore, full of joy. "The Groove is Gonna Get You" was preceded by Dizzy Gillespie's "Birk's Works" at the earliest date of the collection. Funk and Groove are the key operatives in this collection.

CD 2 contains a diptyptic of two New York City performances: a 2008 take on Paul Mitchell's "Hard Times" with David "Fathead" Newman rubbing against a 2007 runthrough of Gigi Gryce's "Minority" with Phil Woods. Sidran is playing piano, demonstrating that he can change from the deepest gospel/blues to lightly-applied be bop with a facile elegance, all the time jiving on in his hipster way. CD 3, in a lion's share, presents Sidran in the 1990s. Again, juxtaposing an NYC 1991 performance of "Song for a Sucker Like You" smashes into a London 2001 performance of "On the Sunny Side of the Street." Sidran is a master of contrast and loves to engage it in a variety of ways. The one thing evident in all of Sidran is his generous sense of humor that shines through all he does. He easily takes his passions and shares them with every on Ben There, Done That: Ben Sidran Live Around the World (1975-2015).