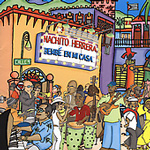 Nachito Herrera conceived this recording as an exposition of eleven different Cuban song forms—from bolero and cha-cha-cha through guaracha and guanguanco, with a strong admixture of jazz throughout—but any danger of Bembé En Mi Casa coming on like a college lecture disappears with track one, note one. A campus riot would be a more accurate description. Like the title track says, "Party at mine!" The music starts out hot and passionate and stays that way, with only brief pauses for reflection throughout (eg. the ballad "Nostalgia" and the piano-plus-string quartet danzon "Llegaron Los Millonarios").

Herrera's a big man of ebullient appearance, and his music sounds like he looks: broad, brassy, vigorous, and extroverted. His piano style evokes something of the early jazz barrelhouse players: two fists on fire, romping all over the keyboard. His arrangements are similarly hard-hitting—even without overdubbing, the six instrumentalists in the lineup sound like a band twice that size. He has superb chops and he knows the rivers and tributaries of Cuban music with equal intimacy.

Born in Santa Clara in '66, Herrera took a Masters in Music at Havana's Instituto Superior De Arte and worked with the Tropicana and Valentin orchestras before moving to the US, where he's based in Minneapolis, Minnesota. This is his first solo shot in the international spotlight in the wake of his involvement with ¡Cubanismo!—and as noted above, he uses the opportunity to celebrate a broad sweep of Cuban music.

From Havana to Minnesota, Herrera's international trajectory is only just beginning, and Bembé En Mi Casa is a Class A blast off.