BY GLENN ASTARITA
April 18, 2011
Sign in to view read count
Track review of "The Night Ocean" 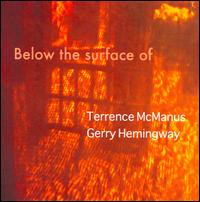 Guitarist Terrence McManus conveys an extensive music vernacular, tinted with percussive attributes and perceptive interactions with famed drummer, bandleader and consummate improviser Gerry Hemingway during Below The Surface Of. The duo engages a pliant game plan, executed at various pulses, and a broad soundstage that invokes an entertaining outlook, combined with blooming adventurism.

The duo kicks off the festivities with "The Night Ocean." Here, Hemingway lays down a swaying, medium-tempo swing groove, underscored by his counterpart's subliminal lo-hum electric guitar sound. They pursue a casual vibe while gaining steam in an understated sort of way. McManus spars, swerves and methodically ups the ante as the piece progresses, topped off with linear phrasings and stark contrasts. The duo's modality is akin to a temperate debate, with an exit strategy that abides by the intro, featuring McManus's ground-hum drone that seemingly fades into eternity. Overall, the artists cast a multitude of intriguing propositions that bait the mind's discerning eye amid gobs of staying power on ensuing listens.