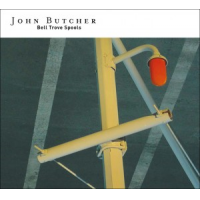 In saxophonist John Butcher's extensive discography, there are examples of many contexts, from solo through duos—including the recently released Daylight (Emanem, 2012), with drummer Mark Sanders, and At Oto (Fataka, 2012), with pianist Matthew Shipp—and trios, up to larger ensembles including Butcher's own seven-piece group, which recorded Somethingtobesaid (Weight of Wax, 2008). Taken together, they paint a detailed picture of the breadth and depth of Butcher's abilities.

Yet, if it were necessary to zoom in on a single facet to characterize Butcher's playing, the solo recordings could be the best place to start. Considering how frequently he plays solo in concert, Butcher solo albums are relatively rare. However, those such as Thirteen Friendly Numbers (Acta, 1992; Unsounds, 2004), Fixations (Emanem, 2001), Invisible Ear (Fringes, 2003) and Cavern with Nightlife (Weight of Wax, 2004) are essentials. As Butcher's last solo CD was the extraordinary Resonant Spaces (Confront, 2008), the arrival of Bell Trove Spools is particularly welcome.

This album features two US recordings, a concert in Richmond Hall, Houston, in April, 2010, and a studio recording made in Issue Project Room, Brooklyn, in November, 2011. On the Richmond date, Butcher plays tenor saxophone, soprano in Brooklyn. Both display the characteristics that make his solo playing—live or in the studio—so compelling. He never sounds as if he is going through a set routine or following well-trodden pathways; instead, he is always exploring the acoustic characteristics of the space, his own playing and the interactions of the two.

Consequently, his playing always sounds fresh and interesting. His explorations of the spaces are most obvious on each venue's opening piece. On Houston's "A Place to Start," he sounds sustained notes of varying frequencies and lets them resound, revealing a slight echo which he then uses to his advantage. On Brooklyn's "First Dart," he sounds short soprano notes to test out the space, slowly constructing a multilayered collage consisting of his notes plus their echoes—quite literally playing along with himself.

Most importantly, even when he is exploring, it never sounds like a test run, as Butcher creates vital, engaging music in the process. The same is just as true when he employs saxophone techniques that go beyond his instruments' normal boundaries. So, "Padded Shadows" begins with the percussive sound of the tenor's pads and, as Butcher blows with increasing strength, leads into a soundscape of staccato sounds that fit together into a coherent whole. "Willow Shiver" employs further percussive sounds plus amplification to generate the saxophone feedback sounds of which Butcher has become a specialist. In total contrast, the opening of "Perfume Screech" is played relatively straight, with Butcher improvising a fluent stream of melodic phrases.