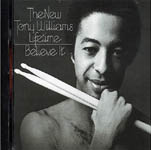 By the time drummer Tony Williams left Miles Davis in '69, he had moved even farther away from the acoustic tradition than his former employer. His first recordings with his new band, Lifetime, were characterized by the sleeve instructions: "Play it Loud!" While the energy level was high and the music was infused with a rock and roll philosophy, it was nevertheless uncompromising and continued to push the boundaries; intense, daring and sometimes a little terrifying, the early incarnation of Lifetime was a literal barrage on the senses.

By '75, Williams had signed with a new label, pieced together a New Tony Williams Lifetime, and moved in a little more conventional jazz-rock direction. But unlike so many fusion records of the time, Believe It managed to be powerful without the bombastic pyrotechnics of bands like Return to Forever. Originally available on a CD that combined it with the far less successful follow-up, Million Dollar Legs , this long out-of-print title has finally been reissued by Columbia, remastered and with two bonus tracks.

Believe It features former Motown bassist Tony Newton, keyboard player Alan Pasqua and, most notably, British guitarist Allan Holdsworth, who, while already somewhat of an underground legend in his own country, had yet to make an impression in North America. Believe It changed all that, demonstrating that not only was Holdsworth a fresh new voice on his instrument, but a fine writer as well. "Fred," later re-titled "Kinder" by Holdsworth, and a staple in his repertoire for some years to come, introduces Holdsworth's unique harmonic language, with a lyrical bent that manages to be completely distinctive. And his playing style is quite simply like no other; influenced heavily by Coltrane, Holdsworth, even at this early stage in his career, is capable of sheets of sound that, punctuated by held notes and legato runs, are visceral in their impact.

No less visceral, of course, is Williams himself. While peers including Billy Cobham and Lenny White gravitated towards more overblown displays of virtuosity, Williams overpowers both with his stronger sense of groove and sheer muscularity. And while he is every bit as capable of extravagant displays of technique, he always sounds more musical. Even on intense burners like the Holdsworth-penned bonus track "Letsby," he is less concerned with how many beats he can throw into a fill; and his solo over Holdsworth's power chord ostinato is the epitome of construction.

For someone who moved the concept of rhythmic freedom so far forward as part of Miles' second quintet, Williams may have been the most overtly rock and roll-informed drummer of the mid-'70s fusion era. With an inherent sense of groove and honest energy that comes from compositions that are less contrived and more direct vehicles for improvisational flight, Believe It is one of the most compelling arguments for the validity of jazz-rock fusion, before the term became such a dirty word.

Believe It is currently reissued in the UK only.