BY EDWARD BLANCO
October 19, 2012
Sign in to view read count 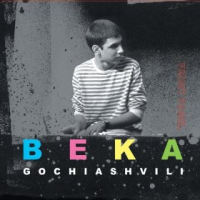 An amazingly talented prodigy from Tbilisi, Georgia, sixteen year-old Beka Gochiashvili is nothing short of extraordinary, emerging as the latest piano virtuoso to hit the jazz circuit with an impressive self-titled debut sure to turn some heads and garnish well-deserved attention. Keyboardist Chick Corea's influence permeates the album, beginning with performances from Return to Forever band mates, bassist Stanley Clarke and drummer Lenny White. It was White who came across this young man, who he found to be musically mature beyond his years, later describing the pianist as an "old soul in a very young body."

However, the young pianist was already well-versed in Corea's music, having first heard of the icon when he was six and receiving an email from the artist that concluded with "Bye Beka, Un Gran Abrazo." Gochiashvili composed the opening "Un Gran Abrazo" in dedication to Corea; not only a phenomenal pianist but a gifted composer, Gochiashvili penned seven originals for this first recording, and borrows the somber "Heiro Bichebo," featuring vocalist Natalia Kutateladze, along with "When Almonds Blossomed," from renowned Georgian composer Giya Kancheli, as well as including White's "Chicknstan" to round out the set.

An "A list" of players graces the record, amongst them guitarist Tom Guarna, bassists Victor Bailey and John Patitucci, trumpeter Wallace Roney, and saxophonists Jaleel Shaw and Ben Solomon. The music is first-rate with no mediocre pieces; in fact, every track can be considered a keeper for airplay purposes. Having first heard the music of Keith Jarrett (his other musical father along with Corea) at the ripe old age of four, the pianist dedicates the buoyant "For Keith," demonstrating his more than appreciable chops.

Three more dedications of note include the poignant "Made of Tenderness," for his mother; the gorgeous ballad "Song to Niniko" and brisk, samba-flavored "Passionately In Love," both dedicated to his girlfriend. Joining Guarna and bassist Ben Williams in a tight trio performance, the group harkens back to the retro feel of the past with the swinging "Coco." The other sizzler is the hard-driving "L's Bop" featuring more quick, right-hand key play from the young leader.

Gochiashvili closes the album on Fender Rhodes, in a departure from the repertoire with the modern/fusion-like "Exit to the West" demonstrating the pianist's versatility and depth musical talent. At the tender age of sixteen, Beka Gochiashvili may have a journey to go before achieving stardom in the music world, but with the launch of this audacious beginning, this extraordinary pianist seems to be well on his way. This highly accessible debut unleashes the raw energy and talents of a pianist whose creative juices have only just begun to percolate.