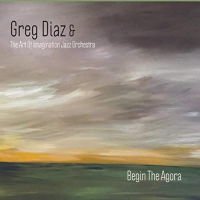 At a time when many contemporary big bands are eager to brush aside the past and "break new ground," it's always a pleasure to welcome an ensemble that honors and espouses jazz tradition with no appreciable loss of savoir-faire or, well, imagination. Begin the Agora, the debut recording by saxophonist Greg Diaz 's Florida-based Art of Imagination Orchestra, embraces a customary point of view that in no way encumbers the leader's resourceful compositions (three) and arrangements (all). In other words, this is big-band jazz that swings like its forbears while at the same time nurturing an astute intellectual temperament.

The swing component rushes to the fore straightaway on guitarist Kevin Eubanks' "The Navigator," whose engaging melody is underscored by muscular ensemble work and bright solos by guitarist Christian Davis, pianist Eero Turunen and Diaz, on tenor sax. The brass are prominent on Diaz's waltz-like "Circadia," prefacing earnest statements by Davis and Diaz, before the ensemble takes a sharp turn southward toward New Orleans with a charming medley of "Brother John," "Second Line Strut" and "Iko Iko," on which Diaz sings, after a fashion, with unnamed backup support while Davis, Turunen, tenor Scott Klarman, alto Ismael Vergara, trumpet Doug Michels and baritone Mike Brignola parcel out the solo space, Crescent City-style.

Diaz's "Frank Blank," dedicated to Frank Perrotta, is another flag-waver in the Basie / Herman manner, on which trumpeters Seth Merlin and Kevin Wilder , trombonist Russell freeland and alto Manny Echazabal shine while drummer Matt Calderin ushers in the postlude with his finest Buddy Rich impression. "Begin the Agora" (in no way to be confused with Cole Porter) swings hard from start to finish, underlined by Calderin's assertive timekeeping, Diaz's clever chart and crisp solos by Klarman, Davis, Turunen (on electric piano) and Diaz, whose expressive tenor presages the forceful climax.

Aside from the album's slender 37-minute playing time, there is nothing here to reprove. In sum, a strong and eloquent (albeit concise) debut.