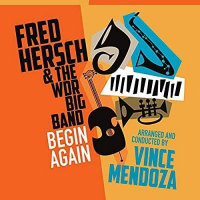 Throughout pianist Fred Hersch's long career, he has mostly worked in trios and other small units, rarely doing much with large ensembles. That makes this session of Hersch featured with Germany's WDR Big Band a special treat. They play a program of the pianist's compositions from various parts of his career, all arranged and conducted by Vince Mendoza.

Mendoza's arrangements and the big band's excellent playing give a new depth and texture to Hersch's writing. On "Rain Waltz," his dreamy piano line is embellished by a warm, brassy orchestration reminiscent of Oliver Nelson. This piece also gives solo space to Ruud Breuls' subdued trumpet and Karolina Strassmayer's smeary alto. The entire band provides an airy classical backdrop to Hersch's romantic playing on "Begin Again," while "Song Without Words #2" is mostly a wistful feature for the soaring passion of Johan Horlen's saxophone. The eerie "Out Someplace (Blues For Mathhew Shephard)" maintains its original spooky character. Hersch drops brittle single notes into a field of sparse, wispy noises before moving into a dark, noirish melody while the horns bend nightmarish blues around him.

The livelier aspects of Hersch's originals are spotlighted on tunes like "Havana," where his piano flows alongside busy reed voicings over a prickly Latin-tinged backdrop, and the brash "Forward Motion" which surges like Chick Corea with a salsa backbeat. The last named also features Bruels and trombonist Andy Hunter crying and babbling as a duo, and Paul Heller blowing effusive tenor on his own. "The Big Easy," a laid-back take on New Orleans culture has the entire orchestra moving at a leisurely strolling pace; Andy Haderer's slow-walking trumpet and Ludwig Nuss' muted trombone are featured along with Hersch's Monkish piano stumbles. The closing piece, "The Orb," is the simplest work on display, a platform for romantic piano caresses, supported by quiet interludes of glowing reeds and horns.

Fred Hersch is rightly regarded as a great pianist but this set points out how good he is as a composer too. His work is especially powerful when matched with an arranger like Vince Mendoza who knows how to bring out the strong points in his work. This is an excellent new slant on Hersch's music.