By Jeff Dayton-Johnson
April 19, 2007
Sign in to view read count 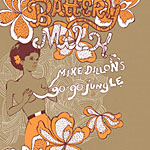 Vibraphonist Mike Dillon has a very good idea (which is much more than is needed to make a record these days). Dillon's idea is to make a kind of distorted around the edges, loud, vibes-based funk-rock. Perhaps the finest example on this, his début recording, is "Broc's Last Stand." It's the presence of the vibes that sets Dillon's idea apart from other more pedestrian funk-rock experiments, tracing a line that connects us back to, say, the Milt Jackson Quintet's April 1952 version of "Bags' Groove," with Lou Donaldson on alto sax. An extra ingredient on a handful of tracks ("Lunatic Express" and "Stupid Americans") is driving punk guitar.

Dillon is a good improviser too (check out "Harris County"), but it's above all this combination of sonic elements—vibes, sax, Milt Jackson-style funk, and punk guitar—that repeatedly pushes the listener's pleasure buttons on Battery Milk: I'm thinking of "GoGo's Theme," the opening moments of "The Blame Game" and "Lopsided Melon Ball."

The record's impact is deflated by a couple of the supporting cast, however. First, the wonderfully named drummer GoGo Ray is a marvelous accompanist, propelling the music with brio; but he's a true hazard as a soloist, sounding like Led Zeppelin drummer John Bonham falling down a flight of stairs, struggling to slow his descent. (Actually, Bonham already sounds like he's falling down the stairs—recall the solo toward the end of "Rock and Roll"—so you see how serious GoGo Ray's problem is.)

Vocalist J.J. "Jungle" Richards, meanwhile, growls and whines through a number of tracks, his singing some kind of melange of Tom Waits, George Clinton and Frank Zappa, which sounds promising enough. In the end, though, his singing is too thin to sustain the gravitas he tries to muster. So too when he changes tack and goes for a laconic Marvin Gaye sound on an otherwise solid reading of Aaron Neville's "Hercules."

Weird lyrics about sex ("The Voyeur," "Your Mother Was My Teacher") are fine; but the record is not well-served by monotone critiques of American chauvinism ("Stupid Americans") and George W. Bush ("Bad Man"). Sound samples of the president on the latter, in fact, sound eerily like Will Ferrell imitating George W. Bush; while the background chorus ("he's a bad man; he's a cruel man") is so simplistic you might almost think Dillon is parodying the president's detractors.

Battery Milk is a mixed success: one of those records that will have you pushing the skip button and the repeat button with about equal frequency. Quirky débuts are a good thing, though: stay tuned for Dillon's next move.