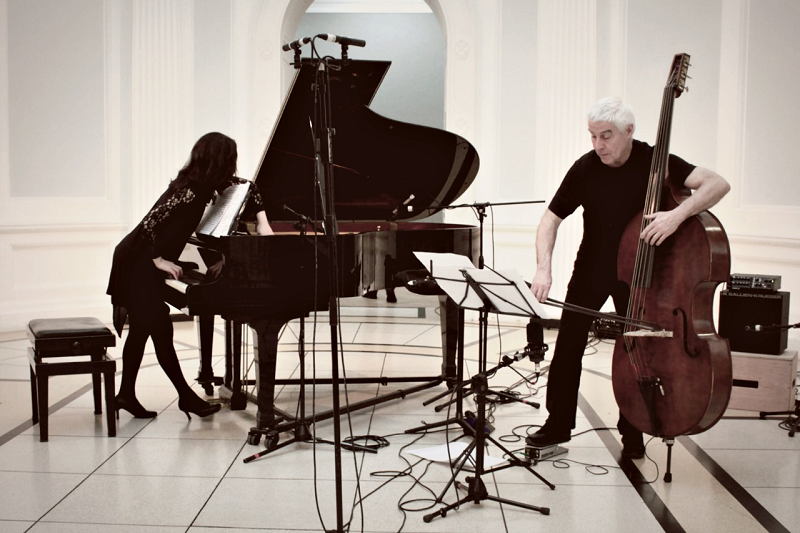 The Hugh Lane Gallery has been hosting free Sunday afternoon concerts in Dublin for over forty years—a remarkable feat by any yardstick. It's the quality of the music, however, that makes this weekly event something truly special. This Sunday saw Barry Guy and Izumi Kimura together for the first time, as part of the inaugural Spectrum festival, a weekend celebration of improvised and experimental music jointly produced by Improvised Music Company, Note Productions and Hombeat. Guy and Kimura was a tantalizing prospect on paper, with each musician bringing an embarrassment of riches to the party.

Guy, a doyen of the European free-jazz movement of the 1960s and 1970s, is equally noted for his contemporary compositions for ensembles large and small, and boasts a discography that very few can match for breadth of scope.

Kimura may be less well known by comparison, but the Dublin-based Japanese pianist is an extraordinary talent in her own right. The spellbinding Asymetry (Diatribe Records, 2010) arguably ranks as one the most adventurous solo piano outings of the past decade, while her performance of John Cage's "Sonatas and Interludes for Prepared Piano" and her electrifying improvisational duo with Joe O'Callaghan were absolute highlights of Galway Jazz Festival 2016.

The opening notes that Guy ripped from his double bass kick-started a free-improvisation of tremendous energy and untamed virtuosity -the two musicians pouncing hungrily on each other's signals in a thrilling exchange of uncertain trajectory. Guy maintained a furious tempo as he switched between plucking and bowing without skipping a heartbeat, while Kimura swept the length of the keyboard, mixing torrential cadenzas and jagged punctuation with pronounced percussive effect. The flames gradually abated, ushering in a meditative, somewhat abstract finale of striking juxtaposition.

The duo had set down an early marker, leaving the audience in no doubt that a serene Sunday recital of some sort this definitely wasn't going to be.

"Void (for Doris)" from Ithaca (Intakt Records, 2004), Guy's trio outing with Marilyn Crispell and Paul Lytton, hovered tantalizingly between grand and austere, the duo moving seamlessly back and forth between passages of sketchy minimalism and bolder pronouncements. When the final notes had decayed, Guy's palm caressed the bass-body in slow, circular movements, the tenderness of the gesture at odds with the spare, cold architecture of this impressionistic through-composed piece.

Textural and emotional contrasts defined a suite-like tryptic of compositions, ("Fire and Ice," "Some Other Place" and "Blue Horizon for M.H.,") whose titles were evocative—if not wholly indicative—of the contours to unfold. Kimura's flurry of jolting, bottom-end rumblings and Guy's nerve-jangling bass string screeches opened the floodgates, the duo building quickly towards a sonic tempest. The almost lyrical calm that followed was brutally punctured by Guy's manic bowing, an unnerving pattern that was repeated to ever-more jarring emotional effect. Kimura's damped-strings percussive chiming and Guy's innovative recycling of a stick to first damp, then bow and finally percussively strike the bass strings, made for potent sonic theatre.

Kimura's unaccompanied introduction to the next number fused metronomic high-register pulse and peeling melodic motifs. Guy's gently bluesy entrance steered the duo towards greater lyricism, though Kimura wasn't long in deviating, unleashing a jangling, rising-falling course of some drama. As the current carrying Kimura abated, the music petered gently out, the dual lines of piano and bass floating down in a lovely pianissimo finale.

Guy's solo spot reproduced Five Fizzles for Samuel Beckett (NoBusiness Records, 2015) an EP-length work inspired by the Irish Nobel laureate's short prose. Played through uninterrupted like a suite, Guy's terse evocations of moods suggested by Beckett's prose pieces saw the bassist at his most virtuosic. Feverish bursts of hammering or plucking contrasted with intervals of great finesse. Woozy slides and intervallic leaps gave way to trilling, harp-like timbres from the strings' lower extremities. Blink and you'd miss Guy manoeuvre a little stick from bottom to top end of the bass strings, damping them as he thrummed and hammered with frenzied intensity, then striking the exposed end of the stick to elicit reverberating harmonics. It was as thrilling to observe as it was to listen to.

The last number pitched Guy and Kimura once more into close-knit choreography; impressionistic minimalism soon erupted into jagged dissonance, the two musicians locking in and out of tight unison lines and trading back and forth like sparring heavyweights, Kimura pounding the keys with a vengeance and Guy's bow sawing at the strings mercilessly. The piece climaxed with a spirited joint flurry, signalling an eruption of sustained applause from the appreciative audience.

For several minutes after the performance had ended audience members engaged in lively conversation—a very spontaneous response to the energy and emotional impact of the music. It was a release that spoke volumes of the power of music to provoke, stimulate and animate. It will be fascinating to see if Guy and Kimura develop their musical relationship. On the basis of this stirring performance at the Hugh Lane Gallery these two kindred spirits might have a lot more exceptional things to say together.