BY EDWARD BLANCO
October 25, 2015
Sign in to view read count 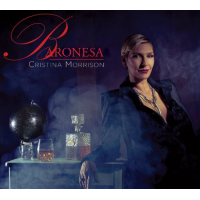 After visiting the Galapagos Island to film a docudrama based on the life of Baroness Eloise Von Wagner de Bosquet, Ecuadorian-American mezzo soprano vocalist Cristina Morrison loved the place so much she moved to Ecuador and spent ten years there. Falling in love with the story of the Baroness, her second album Baronesa, presents the songstress voicing lyrics in four languages (English, Spanish, Portuguese and Italian) singing eight originals and four cover pieces as she crosses genres from jazz and tango to boleros in delivering an enchanting musical statement. Growing up between Ecuador and Miami, the actress/vocalist is now based in New York but still travels to Ecuador where she is an avid supporter of arts education in the public schools of Isabela, the largest of the Galapagos Islands.

Produced by master pianist Misha Piatigorsky, who also performs on the album, Morrison assembles an eclectic cast of players to interpret the music including Danton Boller on bass, Joel Frahm on tenor, Mauricio Herrera on percussion and Tatum Greenblatt on trumpet among others. Antonio Carlos Jobim's classic "Corcovado (Quiet Nights of Quiet Stars)" starts the music off with a gorgeous Brazilian flair followed by the brief but beautiful Piatigorsky tune "The Sky Is In Your Eyes," where Morrison voices her lyrics in a sultry smoky manner.

The Arthur Hamilton standard "Cry Me a River," takes on quite a twist here with a version that features saxophonist Frahm on the soprano and a play on the melody for a decidedly non-standard treatment of the classic that makes it sound completely new. The soft "Ophelia's Madness" is given a warm and gentle treatment by Morrison on what is essentially, one sensuous slow and beautiful ballad. The singer takes a one-hundred and eighty degree turn on the perky "La del Estribo," a lively shoulder-moving Latin tune voiced in Spanish featuring wonderful tenor solos from Frahm. Shifting to a bit of the tango featuring Victor Prieto on the accordion, Morrison-who continues here in Spanish—sings "Mi Amargo Placer" in a tad softer manner.

The most ambitious piece of the album is the varied "Spanish Dreamland Inquisition" featuring the vocalist with some spoken words, back grounds vocals and seemingly folk song atmosphere and texture to the piece. The title tune comes across like a lively, even funky-styled song at times with Morrison singing the lyrics in both English and Spanish. The album concludes with the very humbling "Light or Dark" returning the Baronesa to the more subtle and softer landscape with which she is so familiar singing the finale with a lot of soul and expression.

Providing another session of magical moments, Cristina Morrison's creative and genre-blending Baronesa showcases a superb vocal instrument in a tasteful collaboration with pianist Piatigorsky, and features cast of world-class players who interpret a set of world-styled music with grace.