BY GLENN ASTARITA
September 15, 2013
Sign in to view read count 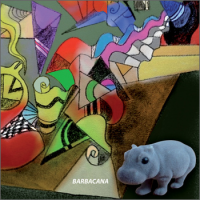 This Anglo-French quartet dishes out a profusion of surprises on each track. Youthful vigor and ingenuity are staples for these musicians who generate a multidimensional platform, with inferences from progressive rock, jazz-rock and avant-garde-like adventurism. The album represents another young band presented by UK-based Babel Records that teeters on the leading-edge of what could be considered a nouveau jazz-framed outlook, where artists expand previously established limits.

They blastoff with "Animation," a piece that could ring in a new genre, perhaps cited as electronically treated jungle jazz. With programmatic percussion grooves, slinky guitar licks, and bracing unison breakouts, the band differentiates its demeanor from any semblance of convention. Hence, the program contains a varied track mix. Within certain regions of sound, the artists probe each other's psyche amid textural keys, probing sax parts and polytonal treatments, given their use of supplemental instruments, including toys, prepared piano and cello. With the addition of off-kilter cadences and lighthearted choruses, the musicians pack a medley of contrasting factors into the overall schematic.

"For No Raisin" is a leisurely moving dirge, commencing with drummer Sylvain Darrifourcg's simple beat, accompanied by keyboardist Kit Downes' concise bass line. Yet a few oddities prevail, as Downes daintily tinkers on piano followed by tenor saxophonist James Allsopp's entry point, where they advance the proceedings into a walking blues vamp, featuring Adrien Dennefeld's slippery, slide guitar licks. Essentially, this piece would be a suitable soundtrack for a lazy day, with no agenda in mind. But they reenergize during "Migration-Big BIG Shop," and soar to a cataclysmic climax via anguish and determination atop Darrifourcq's crashing drums and Dennefeld's howling guitar statements. It's about upward momentum towards the red zone. In sum, Barbacana dissects tradition and casts a silhouette that proposes a garishly enacted sense of newness.