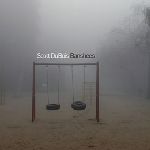 Guitarist Scott DuBois is a rising presence on the New York jazz scene, an impressive soloist and gifted writer whose abilities garnered the attention of legendary saxophonist David Liebman, who served as a sideman on DuBois' previous releases, Monsoon (Soul Note, 2002) and Tempest (Soul Note, 2007). Banshees is the Sunnyside debut of the guitarist's international quartet, which features the Berlin based multi-reedist Gebhard Ullmann, fellow New Yorker Thomas Morgan on bass and Copenhagen resident Kresten Osgood on drums.

With their labyrinthine head melodies and intricate rhythms, DuBois' thorny compositions lend themselves to extended thematic development. An astute melodist, Dubois reveals a mellifluous side on a pair of supple ballads that offer dynamic contrast to the session's roiling intensity.

Reminiscent of John McLaughlin's adventurous pre-fusion efforts and the austere angularity of contemporary masters like Joe Morris and the late Derek Bailey, DuBois favors an asymmetrical approach, navigating oblique intervals with a nimbleness that would make Eric Dolphy proud. A tonal purist with a bright, naturalistic timbre, DuBois eschews electronic efx, unleashing his quicksilver cadences on a clean-toned hollow body with kinetic force and focused intensity.

DuBois' sparring partner on the front line, Ullmann is a renowned international artist whose previous quartet album, New Basement Research (Soul Note, 2007) was one of 2007's most impressive records. A triple threat multi-instrumentalist, each of his horns elicits its own personality; his tenor is burly and effusive, while his sinuous soprano is as acerbic as his haunting bass clarinet is otherworldly.

While the majority of the session consists of pithy free bop, DuBois also contributes two heartfelt ballads. The pastoral meditation "Canaria" is a work of understated beauty that unfolds at a glacial pace. The plangent "Old Man on Platform" is an opulent essay in post-Coltrane spirituality that waxes and wanes with a languorous undercurrent of shimmering energy.

Despite his capacity for restrained euphony, DuBois' strong suit is revealed in a series of turbulent compositions that careen into surprising detours in rhythmic structure. Galloping bass lines and crackling ride cymbals usher in a riot of interactivity, inspiring gruff multiphonic caterwauling from Ullman and bursts of rapid fire notes from the leader. DuBois augments abstruse swing with a variety of intriguing devices; stop time interludes ("Inverse"), lock step grooves ("Mouse Song") and dynamic counterpoint ("Mid to the West") all add layers of density to the quartet's fervid explorations.

A most impressive release, Banshees is as hair-raising as the title suggests. A singular talent, DuBois is definitely an artist to keep an ear on.