BY DAVID RICKERT
October 17, 2005
Sign in to view read count 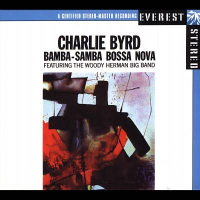 Charlie Byrd never really got his due as a jazz guitarist; most people see him as a pioneer in bossa nova and little else. Of course it doesn't help that many of his records were quiet affairs, lacking soul and preoccupied with applying classical technique to jazz chops. Many preferred to stick with Wes or Kenny rather than follow Byrd on his world music excursions.

However, Byrd really excelled in the area of presentation, reshaping South American folk songs into brilliantly orchestrated gems and crafting nifty little originals that worked quite well in the idiom. Even diehard Byrd fans may not have known that this 1959 album existed, a relic from the time when Byrd was a featured soloist with the Woody Herman band. In what must have been an engineer's nightmare, Byrd's unamplified guitar is backed by Herman's big band, and the results erase the shortcomings of each: he plays with a little more fire and Herman's band reigns in their barnstorming tendencies. Byrd contributes four terrific originals, all of which work in the Latin music vein in one way or another. The second half is a version of Ralph Burns' "Summer Sequence in which he recast the main themes for guitar and the band provides tonal shadings behind.

Those looking for a great Woody Herman record will be disappointed, for the Herd is clearly just providing backing for Byrd (Herman scarcely gets any time in the spotlight). But this is one of Byrd's strongest records, an unlikely collaboration that paired nimble guitar playing and punchy riffing to create a jazz gem.