By JAMES NADAL
February 4, 2015
Sign in to view read count 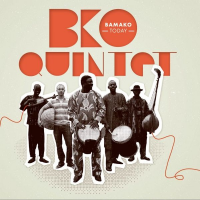 While most musicians have the convenience of being in a relaxed atmosphere while preparing to produce a record, this was not the situation for the members of the BKO Quintet. Amidst the revolutionary turmoil which embroiled Mali in late 2012 to the brink of civil war, they maintained focused on their musical endeavor, albeit with a warranted sense of urgency, until with the proper visas and connections they were able to fly to France to produce Bamako Today. Though it took two more years to come to light, the outcome is a remarkable recording which captures the indomitable African spirit to create music against all odds.

The originator of the BKO Quintet idea, is French percussionist, Aymeric Krol, who went to Bamako, Mali to study the local drumming techniques under djembefola master Ibrahima Sarr, and in the process assembled the core group of musicians that would become the quintet. In an unprecedented move, he united the music of the Mandinka griots—jelis—with that of the Bambara hunters—donso—and came up with an innovative presentation that resonates with ethnic accuracy and passion.

This particular ensemble features two distinctive vocalists, Fassara Sacko, of the griot tradition, and Nfaly Diakité of the donso. Though they might sound similar, there is a noted difference, akin to the blues, where there is the traditional country acoustic, and the urban electric. Though categorized differently, it's still the blues. Sacko has a tougher anxious approach in his vocal, and makes a living in the nightclubs—maquis—in Bamako, as an all-night singer and cabaret entertainer. Diakité, who also accompanies himself on the donsongoni, has a more lyrical rural style and performs regularly in the bush ceremonies where both the performers and dancers are driven to the point of experiencing mystic trances. Both vocalists inherited their talents from their progenitors, as is the time honored tradition.

The donsongoni has a calabash body with goatskin stretched over, and a long thin stick as a neck with six strings, it is the instrument of choice of the hunter people. The djelingoni is of the lute family, with a solid wood body, short neck with four strings, and long been associated with the griots. Abdoulaye Koné the fifth member of BKO plays the djelingoni, and displays a mesmerizing interaction with Diakité on donsongoni, they are considered prodigious virtuosos in Bamako. These string instruments are anchored by the perpetual driving rhythms of Sarr on djembe, Sacko on dunun, and Krol on his hybrid drum kit which incorporates several native drums in a most unusual set up.

There is a continuity throughout this record and the songs slide into each other rhythmically and melodiously. "Ntana," "Beleba chima," "Strange wassolon," "Kongo kono," and "Kononale," are examples of the accelerated numbers, but the cadence is tempered with "Djelike," the chanting offering of "Sacred Bird," and the peculiar blues facsimile "Comment Ca Va," where Sacko sings with a sense of desperation recognizable in any language.

There has been much attention paid to the music of Mali, and with justification. It is as vibrant and vital as any on the planet, and its historical contribution and connection to blues and jazz is well documented. The BKO Quintet blended mixed musical identities resulting in a progressive production, all the while firmly rooted in traditions that date back thousands of years, proving that there is no such thing as limits, boundaries or frontiers when it comes to music.