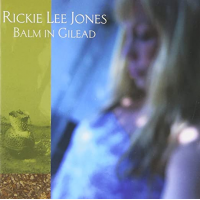 If a musical career spans a period of thirty years, there's bound to be ups and downs along the way. Rickie Lee Jones has always insisted on making her own choices, sometimes baffling her critics with yet another puzzle to work out. Here the Duchess of Coolsville combines her multiple talents as an artist, songwriter and producer with a little help from musical friends like Jon Brion, Bill Frisell, Brian Swartz, Pete Thomas and Reggie McBride.

The album opens with a tribute to Jones' daughter, Charlotte. Like many of the other tracks, "Wild Girl" is an unfinished song that finally catches a second wind for Balm in Gilead. Starting out in a calm and motherly loving mood, a hint of Jones' dazzling signature from Pirates (Reprise/WEA, 1981) suddenly adds spice to the tune that professes of life's wiser lessons.

Ben Harper then takes the lead in "Old Enough," a soulful bluesy duet with Jones painting touches of colors reminiscent of Al Green and Prince. Despite the song's aptitude to really haul every register in abundance and volume, both Harper and Jones maintain a laid-back kind of cool where others might have already screamed it out from the top of their lungs.

Acclaimed bluegrass/country vocalist and fiddler Alison Krauss appears with her violin on "Remember Me," a country ballad that suits the haunting quality of Jones' voice. Singer/songwriter Vic Chesnutt's vocal contributions on "Remember Me" and the psychedelic "His Jeweled Floor" elevate to a new level since he unexpectedly passed away on December 25, 2009.

During live performances in the summer and fall of 2009, Jones explained many of the songs and lyrics. Most deal with emotions and feelings involving personal experiences, like the death of her mother and the ending of relationships. But there's also mention of doubt and reflections on our society, like in "The Gospel of Carlos, Norman and Smith," co-penned by David Kalish, longtime friend and collaborator. Jones' voice blends well with the warm timbre of Chris Joyner who, like Frisell, Kenny Wollesen and Tony Scherr, also appeared on her Evening Of My Best Day (V2 North America, 2003).

There are scents of previous albums on this unofficial 30th anniversary release. "Eucalyptus Trail" breathes the cinematic depth of The Magazine (Reprise/WEA, 1984), with a slow intoxicating pace like the instrumental "The Blue Ghazel," featuring saxophonist Paulie Cerra and organist Joel Guzman. "Bonfires" and "Bayless ST" are signature Rickie Lee Jones compositions, in the light of her acoustic poetry on Traffic From Paradise (Geffen Records, 1993).

This album doesn't match the impact of her 1979 debut or Pirates, but is most certainly a well-balanced collection of songs. A definite highlight is the only song not written by Jones herself, but by her father. "The Moon Is Made Of Gold" is irresistible and charming in its Django Reinhardt-styled jazz tradition, and a perfect playground for Jones' unique vocal qualities, which haven't lost their strength throughout the years.

Wild Girl; Old Enough; Remember Me; The Moon Is Made Of Gold; His Jeweled Floor; Eucalyptus Trail; The Blue Ghazel; The Gospel of Carlos, Norman and Smith; Bonfires; Bayless ST.