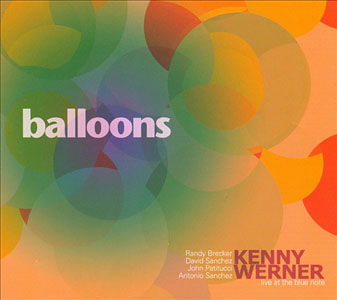 Times sure have been tough for pianist Kenny Werner, and yet, he seems to be turning tragedy into triumph, mining the depths of emotion caused by the accidental death of his daughter, Katheryn, in 2006. While he's been playing in the years since, he was noticeably quiet on the recording front until No Beginning, No End (Half Note), released just a short six months ago, in October, 2010. A sweeping, career-defining recording that earned the pianist/composer a Guggenheim Fellowship Award, it dealt with the heart-wrenching process of grief, redemption and hope, its raw catharsis engendering Werner's most ambitious recording to date, with the pianist enlisting a large ensemble of woodwinds, voices and strings. Balloons returns to a more intimate setting, the quintet that Werner has been touring with the last couple years, including a tremendous performance at the 2009 Montreal Jazz Festival, though this live recording, from a two-night run at New York City's The Blue Note, finds one veteran bassist, John Patitucci, replacing another, Scott Colley, from the Montreal show a year earlier.

Lawn Chair Society (Blue Note, 2007) was a more eclectic set, with Werner exploring the possibilities of integrating technology into the improvisational process. While it also featured a consistent (albeit completely different) group of players throughout, the inherent cohesion of a live recording gives Balloons greater focus—and greater energy, not unlike the earlier, also-live Democracy (Half Note, 2006). Four long songs—three in the 12- minute range, one approaching 18—and "songs" is, indeed, the operative word: while there is plenty of space for effortless and effervescent soloing from everyone, the lyrical nature of Werner's writing encourages his band mates to remain focused on melody, eschewing the "head-solo-head" tradition for something more expansive, more cinematic.

Werner's been using this same frontline of trumpeter Randy Brecker and David Sanchez for a couple years now, and it shows in the duo's ability to coalesce into a near- single voice for the theme of the poignant opener, "Sada," layered over simple descending and ascending pattern, where their lines shift, almost imperceptibly, between unison and harmony, leading to a solo from Werner that perfectly demonstrates the pianist's long-revered approach to the creative process, Effortless Mastery (Jamey Aebersold, 1996). It's clear his band mates subscribe to a similar aesthetic, as Sanchez deliver a solo that, bolstered by Patitucci and drummer Antonio Sanchez, builds to a passionate peak and, after a recapitulation of the theme, goes out on a vamp where Brecker's vocal tone is more about color than melody.

Brecker gets his chance to solo at length on the brighter "Siena," and while his range, accuracy and control of timbre are underlying qualities, it's his similarly thematic approach that makes it one of the set's many highlights, propelled by drummer Sanchez's always marvelous ability to create turbulent underpinnings that still facilely hang onto the propulsive groove.

Live performances are often about being in a moment that, once over, is gone forever, but with Balloons, Werner has managed to capture that moment, and hold onto it in a way that will remains fresh—and filled with surprise—for years to come.